She was alleged to have used her closeness to a former Governor and Senator representing Bayelsa West Senatorial district, Senator Seriake Dickson to intimidate the legislators in the past. 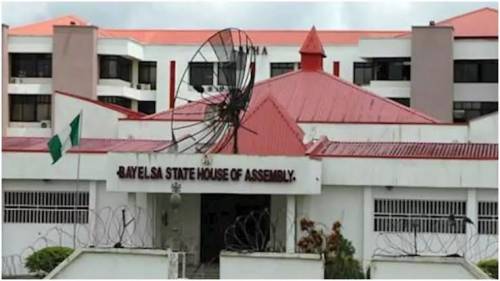 According to a report by SaharaReporters, there was mild drama on the floor of the Bayelsa State House of Assembly on Thursday following the refusal of the legislators to screen and clear a commissioner-nominee for the Local Government Service Commission, Ms Grace Ekiotene over her alleged disrespect to members.

Ekiotene, who was the immediate past Commissioner for Transport before she resigned to contest the State Assembly Primaries of the Peoples Democratic Party (PDP) and lost, was accused of allegedly undermining the power of the legislature on several occasions.

She was alleged to have shunned the members of the State Assembly Committee on Transport on several occasions while in office as commissioner, thereby allegedly frustrating their job of carrying out oversight functions.

She was alleged to have used her closeness to a former Governor and Senator representing Bayelsa West Senatorial district, Senator Seriake Dickson to intimidate the legislators in the past.

At Thursday’s sitting of the Bayelsa Assembly, legislators however paid her back and rejected to screen her but screened others nominated for various positions in the state.

Other nominees, which include Mr Stanley Braboke and Odudu Awipi were screened and confirmed as commissioner and member of the Local Government Service Commission respectively.

Similarly, Chief Eyororokumah Ben Robert has been confirmed as Executive Director, Finance and Administration of the Board of Internal Revenue.

The leadership of the State House of Assembly however set up an ad hoc committee headed by the Deputy Speaker, Mr Michael Ogbere, to look into the reasons behind the lawmakers’ refusal to screen and confirm Ekiotene.