For Mr and Mrs Anyaobi Michael Chukwudi, who lost four sons in a fire incident last month, life may never be the same again. 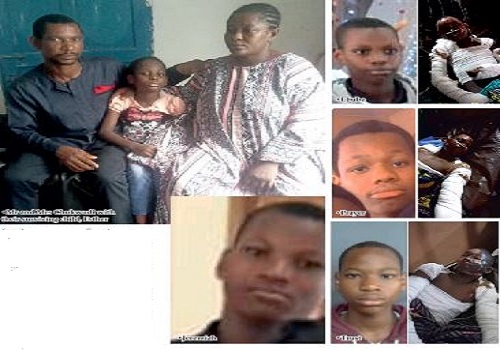 A Nigerian couple, Mr and Mrs Anyaobi Michael Chukwudi has told the heartbreaking story of how they lost their four sons in a horrific and mystery fire that razed their home.

Indeed, for Mr and Mrs Anyaobi Michael Chukwudi, who lost four sons in a fire incident last month, life may never be the same again. Nearly a month after, as they try to pick their pieces, the disillusioned couple tell their story to Gboyega Alaka.

HOW do you begin to placate a husband and wife who lost their four sons to a brutal midnight fire incident within a few days, leaving them with only one daughter, their youngest? How do they even begin to pick their pieces? Will they ever heal? Can their life ever be normal again? And to think that all their belongings, including photos that they could keep as memories, also perished, putting them in a destitute and pathetic situation. However, that is the lot of Mr Anyaobi Michael Chukwudi, 46 from Ibuzor, Delta State and wife, Faith Anyaobi Chukwudi.

According to Anyaobi, who hails from Ibuzor, Delta State, the unfortunate incident occurred on the 25th of June, 2022 at number 118, Tapa Road, Oke-Oko, Ishawo, Ikorodu, Lagos State around 1pm to 1.30pm.

“I was sleeping with my wife in my apartment at number 118, Tapa Road, Oke-oko, Ishawo, Ikorodu, Lagos, when I heard a shout of ‘Help Fire!’ from my children’s apartment. It was the voice of my first son, Prayer.  The four boys slept in one room and parlour self-contain apartment, while my wife and I and our youngest, a girl, Esther, slept in another room and parlour self-contain which we rented anew in the same compound and moved into just two days earlier.

“The former occupant moved out and we decided to rent it, since our own apartment was already too tight for us. When we slept that night, there was no light, so I switched on the generator; but when the PHCN brought back power, I got up, switched it off, changed the source of power and went back to sleep. It was not long after that I heard Prayer’s cry of ‘fire, fire, fire.’

“Quickly, I took the key to open our apartment, ran to the window to check and saw fire everywhere. I summoned courage and opened the door, but the fire was so much and I got severely burnt, so I ran out and called for help from neighbours. Immediately the neighbours started coming out to help. I went back in and rescued Prayer; I rescued TrustinGod, then I rescued Ebubechukwu. But the second born, Jeremiah, was burnt badly. He died right there. We took the surviving ones to the General Hospital, Ikorodu. Even my wife was burnt at the buttocks side. It’s only my daughter that escaped with the slightest burn.

“Luckily, they were attended to immediately at the hospital. Some neighbour had volunteered his car to take the kids there; so when we got there, we saw that they were already on drip and being treated. They did what they could; but they said the burns were too severe and referred us to Gbagada General Hospital that same night.

“We got there by 5.30am and they immediately attended to us, but unfortunately, we lost the second boy, TrustinGod. Then it remained Prayer and Ebubechuckwu. Immediately, they referred us to LASUTH, where we spent about three days, praying and hoping that the two boys survived. They said they had a machine that could aid their treatment there.

Unfortunately, Prayer and Ebubechukwu gave up in quick succession.”

“And to think that I initially thought of locking the door from outside! But I told myself that the boys are big enough. Besides, I thought there might be need for emergency. So I let them lock it from behind every night.

” I think it was because Jeremiah tried to open the door that she got severely burned.”

Chukwudi however have some good words for the hospitals, starting with the General Hospital Ikorodu.

“I’d say they attended to us well; they tried their best. They didn’t ask for money before commencing treatment. But when we arrived there, they asked for money. When they discovered that it was too severe, they referred us to Gbagada. Even in Gbagada, they started attending to them before asking us for money. Likewise LASUTH, where they said they had a certain machine that was needed to treat the boys. However, there was a bit of delay in attending to us there, until my wife started screaming at them that we were referred and our case was emergency.”

Recalling how he felt during the whole travail, Chukwudi said, “When I lost my second son and saw the condition of the last two, Prayer and Ebube, I said ‘God, if you can even leave one of these two for me, I would be grateful’.  But when the last one gave up, I think I fainted and people had to rush to revive me and started placating me. I even felt like ending it all. It was, still is not an easy experience, but with God, my pastor and all the people around me, who encouraged me, I have been able to stay strong. I attend Covenant Life Church, Ikorodu branch and my senior pastor is Pastor Olumide Dada.

“My first born Prayer was 18. He had just finished his school certificate exam and waiting to take his NECO and JAMB; TrustinGod was 16 years old, he was in SS2; then Jeremiah was 13 years old in JSS1. Ebubechukwu was 11 years. He was going to take the common entrance examination.”

Curiously, Chukwudi said the fire and its source remains a big mystery nearly a month after.

“We had only stayed in our new apartment for two days before this fire incident. We were the only family in the two apartments in the house, so I cannot say it spread from any other apartment. Even while the fire was burning, there was PHCN light throughout, so we cannot say it was caused by any spark. Later PHCN people came to conduct an investigation and they said they found no spark anywhere. Even my gas was not on and the cylinder did not  explode even when everything in the apartments and the whole house had burned down. There was no petrol or any inflammable anywhere in the house; even the generator sat in its place while the fire raged, until the fire spread to where it was and engulfed it.”

Chukwudi said the matter was reported at the Owutu Police Station, and they later went to the scene to carry out their investigation, but nothing has come out of it.

Even the landlady (her husband who is the actual landlord lives abroad), who lives nearby, remains perplexed about the cause of the fire.

Now, as he struggles to settle into his bleak reality, Chukwudi says his only appeal is to the government and the good people of Nigeria.

“As it is, we have lost everything. Aside our four boys, everything we owned was consumed in the fire. Even our phones got burnt. Right now, I am squatting at my Senior Pastor Olumide Dada’s place in Maryland, while my wife has gone to stay with her aunty in Akure. So, my immediate need is accommodation and finance to get back on my feet again. I am appealing to the government and the good people of Nigeria to come to our aid. My wife and I will appreciate every help. Before the fire, both my wife and I were engaged in recycling business.”

I almost ended it all – wife

For Chukwudi’s wife, Faith, life can never be the same again. As far as she is concerned, the only reason she is alive and breathing is God. Left alone, she just might have ended it all, because the horror was too much to stomach.

“I even wanted to kill myself, but people prevailed on me. My pastor and his wife were all over me, they kept staying by my side and placating me, preaching, praying, encouraging me. Assuming they did not take me to their house, I probably would have ended it all. Four children, all gone just like that?”

Asked if she suspected any foul play or if the fire could be a result of some carelessness, Faith said, “Not really. I was the one that  cooked that very night and I switched off the gas, so it is not as if we were careless.  I really cannot tell where that evil fire came from. Even my hot plate has been bad for more than three months, so it could not have been from there.”

Could it be from phone fire? Could the children have been charging their phones and slept off?

“No, they did not even have phones. Only the most senior had a phone, but I had seized it from him, because I noticed he was not having time for his studies, even when he had an upcoming exam to write. Also when I sent him on errands, he wasn’t concentrating, so I seized it, pending when he would finish his exams.”

She also made a special appeal for help.

“We will appreciate anything Nigerians can use to support us because we don’t have a house over out head as we speak. When the incident first happened, we were staying with our pastor before I moved to stay with my aunty in Akure.”