Adigheti and the deceased lady, Gift Oloku, had had an altercation, which resulted in a fight. 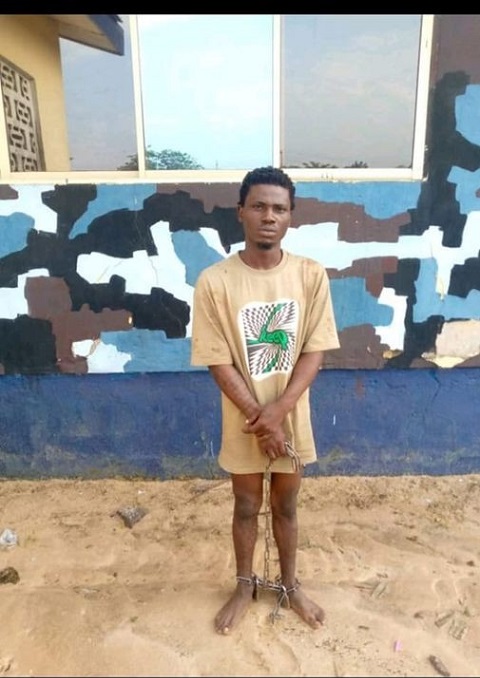 The Delta State Police Command has confirmed it arrested a 23-year-old man, Godspower Adigheti for allegedly killing his girlfriend.
According to the report, Adigheti allegedly macheted his girlfriend, Gift Oloku, a student of Delta State Polytechnic, Ozoro, to death for destroying his iPhone 11 PRO MAX mobile phone.
The incident was said to have occurred on Saturday, July 16, 2022 at Ozoro, Isoko North Local Government Area of the state.
It was gathered that Adigheti and the deceased lady, Gift Oloku, had had an altercation, which resulted in a fight.
A source, who craved anonymity, said the lady, until her death, cohabited with the suspect and had a baby girl for him.
The source said the lady “had gone out and when she returned home, the boyfriend demanded to know where she was coming from”.
In the process, the source said a fight broke out, and the girl destroyed the screen of his iPhone 11 Pro Max mobile phone.
“That was how he attacked her with a cutlass,” the source stated.
Confirming the incident in a signed statement made available to journalists, the Police Public Relations Officer (PPRO) for Delta State Command, Bright Edafe, said that on July 16, 2022, the Divisional Police Officer in charge of Ozoro Division received a distress call that one Godspower Adigheti, 23 years, of Oramudu quarters inflicted machete cuts on his 22-year-old girlfriend, one Gift Oloku.
According to the PPRO, the lady was taken to the hospital “where she was confirmed dead.”
The police spokesman disclosed that investigations revealed that a fight ensued between them over a disagreement, and “the suspect claimed that she damaged his iPhone 11 Pro Max phone while they were fighting, which angered him, and he used a machete on her”.
Meanwhile, the suspect is in custody, and an investigation is ongoing in the matter, the PPRO affirmed.
Top Stories