The residence located at GRA, Otukpo was said to have been set on fire around 3:00 am by unknown arsonists. 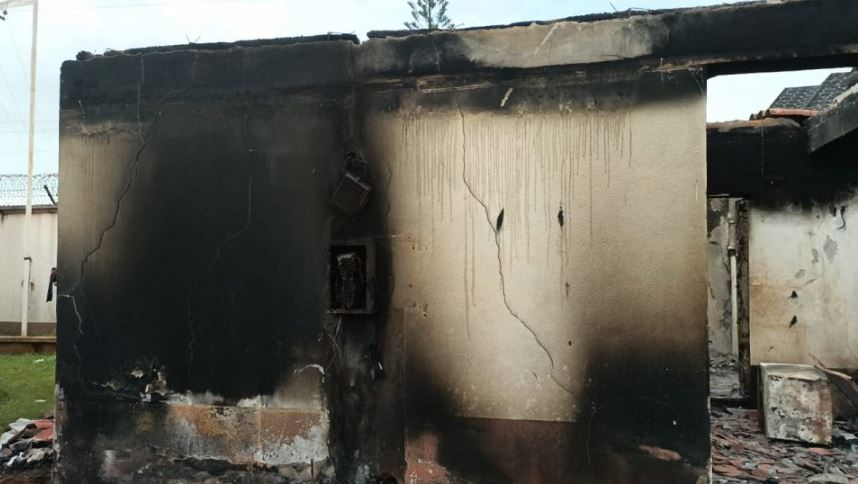 According to a report by The PUNCH, the crisis rocking the All Progressive Congress in Benue State has taken a new twist.

The crisis assumed dangerous dimensions as arsonists early hours of Wednesday set ablaze the residence of a chieftain of the party, Alhaji Abubakar Usman, aka Young Alhaji in Otukpo, Benue State.

The residence located at GRA, Otukpo was said to have been set on fire around 3:00 am by unknown arsonists.

The fire was said to have razed the front section of the building, which housed the security post and auxiliary buildings.

Alhaji Abubakar, a one-time senatorial candidate of Benue South had, a few days ago, displayed a mock coffin with a condolence register of APC at the front of his house.

This some party members in the area interpreted to mean the death of APC.

The display of the coffin and condolence register was to express his displeasure with the leadership of APC in the state over the choice of deputy governorship candidate he (Abubakar) and others opposed to.

When contacted on the phone, Alhaji Abubakar, who confirmed the fire incident said that he personally placed the mock coffin to let the leadership of the party know that something is wrong with the party in the area.

He said, “Yes, they set fire on my house in Otukpo. It affected the security house.

Asked why he displayed a mock coffin in the front of his house, Abubakar said, “I kept the casket to show that our party APC is about to die and there is a need to save it. It is just a message.

“Today is the fourth day the coffin was placed in front of my residence. I am the one that kept the coffin there. I did that because of the happenings in the party in my zone. I did that to show that if something is not done quickly, the party will call for oxygen.

“The crisis is over deputy governorship nomination which some people like John Ochoga, Simon Shango, and Tilley Gyado are insisting on Samuel Ode while I as the leader of the party in the zone is told that it should go to Apa/Agatu.”

The APC chieftain who said he was not leaving the party said that he was not suspecting anybody, “but whoever that has done it is not far from a member of my party in the zone.”

He added, “They burnt down my security house. The police and DSS are aware. I and my workers put out the fire.”

Efforts to get the reaction of Police Public Relations Officer, Catherine Anene, were unsuccessful as she didn’t take her calls.