Bulldozers were used for the demolition exercise at the market located along Kenyatta Street in Uwani-Enugu in the Enugu South local government area of the state on Thursday morning. 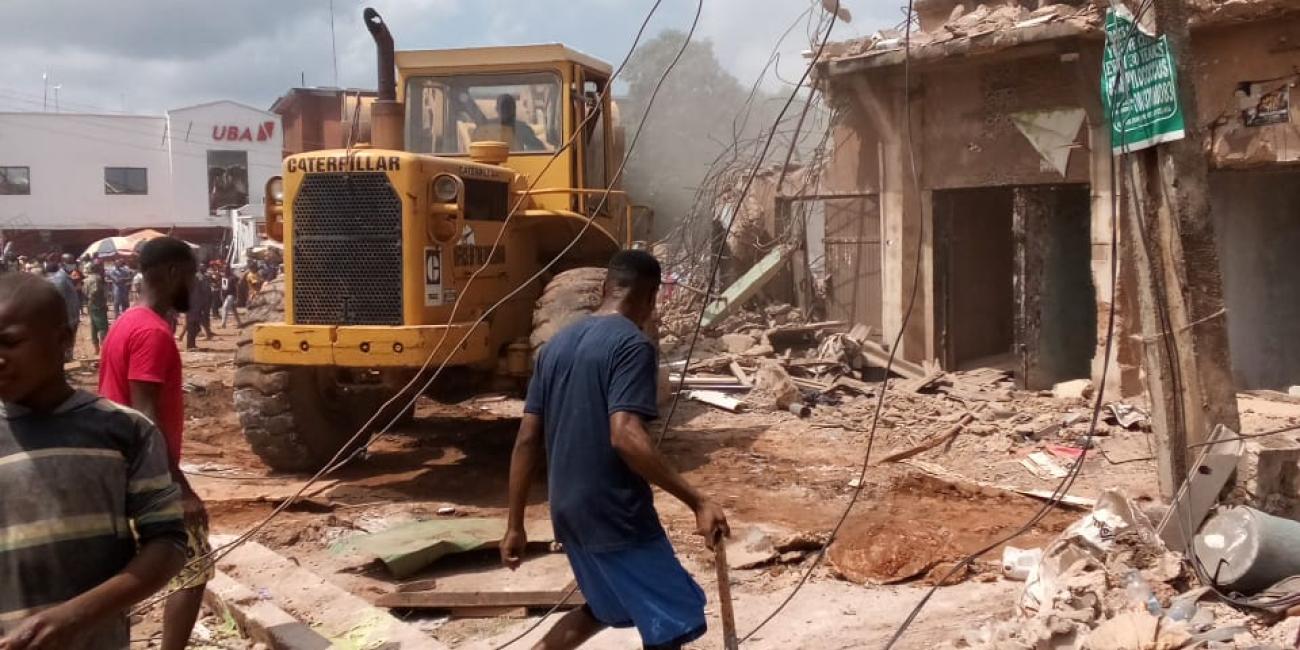 The multi-million Kenyatta building materials market in Enugu has been demolished by the Enugu Capital Territory Development Authority (ECTDA).

It also reportedly destroyed goods worth millions of naira.

Bulldozers were used for the demolition exercise at the market located along Kenyatta Street in Uwani-Enugu in the Enugu South local government area of the state on Thursday morning. The exercise continued on Friday morning (today).

SaharaReporters gathered that the past administration of Governor Sullivan Chime tried to relocate the market to a permanent site but could not achieve it.

Although some traders had relocated to the permanent site which is located at Ugwuaji, along the Enugu-Port Harcourt expressway, the majority have not moved reportedly because of the high cost of the rent.

According to sources, the government allocated the shops to its cronies instead of traders directly, who in turn rent them out to traders at exorbitant prices.

Shortly after Governor Ifeanyi Ugwuanyi was reelected for a second term, his administration started demolishing business structures and confiscating lands, forcing hundreds of people to relocate to villages.

However, the demolition of the building market was reported to have created a chaotic scene.

Sources told SaharaReporters that the bulldozers had arrived at the market before the traders, who were forced to evacuate their goods, some of which were scattered along the streets in Uwani with most of them confused about what to do.

The Chairman of ECTDA, Denge Josef Onoh while speaking to some journalists blamed the leaders of the market for their inability to convince the traders to vacate the street market and move over to the permanent site of the market.

Onoh said the exercise was a development control measure meant to control congestion in the city.

He also noted that the area where the traders converted into a market was originally a place given to the National Youth Council of Nigeria, NYCN, for youth capacity development and recreation, but which the council turned into a building material market in the heart of the city.

“As way back as 2003, a site was obtained and designated as Enugu South International market and the successive state administrations failed to relocate the traders to that site in Ugwuaji and it’s not only hurting the economy of the state but also affecting the development and growth of the city.

“So, we now have an overpopulated arena which has contravened every single aspect of the town planning development; and we have given them so much time to relocate to the site. On January 6, 2000, we came for enforcement and we moved a portion of the traders but some said they didn’t have shops.

"In 1989, they applied for adjustment, an amendment in the purpose clause which said commercial but the commercial activity was supposed to be for the benefit of the council such as a conference hall which they didn’t do but they embarked of sale of every single part of the land demised unto them thereby abusing the purpose clause for which this land was demised,” Onoh said.

Chairman of Kenyetta Market Traders Association, Chinweuba Igwesi said there have been several relocation notices for the building material dealers which some traders in the market failed to comply with, expressing sadness over the development.

“We advised them, some heeded but others did not. Spaces for shops were given at discounted rates then but many of them did not take it seriously. Sensitisation was done as leaders of the market which made some buy theirs at Ugwuaji but others refused. Some of them said that the relocation will not work. Some moved to that place but after some time without government enforcement, they came back.

“These notices have been served for over three years and I thank the Governor of Enugu state but some traders deceived their colleagues into believing that there will be no enforcement. Those who have already relocated to Ugwuaji are giving testimonies of the economic viabilities of the place and cannot wish to come back here,” Igwesi said.