Ademiluyi was paraded on Tuesday, August 9, at the Corps’ Counterterrorism Unit, alongside another suspect, Innocent Ekpako, who stole and made away with his master’s money. 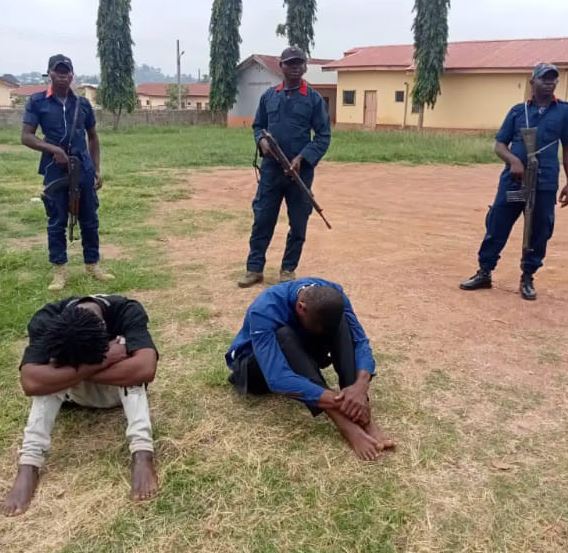 A 36-year-old man identified as Ayodeji Ademiluyi has been arrested and paraded by the Nigeria Security and Civil Defence Corps (NSCDC) Ekiti State Command for defrauding Point-of-Sale operators in the state capital by parading himself as a medical doctor.

Ademiluyi was paraded on Tuesday, August 9, at the Corps’ Counterterrorism Unit, alongside another suspect, Innocent Ekpako, who stole and made away with his master’s money.

Ademiluyi defrauded Point of Sales (POS) operators by sending fake alerts to them and collecting cash.

Afolabi said the suspect used an application on his phone, which also triggered a call from his fake hospital that a patient needed his attention.

According to the PRO, one of the tricks of the suspect is to use bank applications to make false transactions after which he would receive a fake call from his fake hospital that a patient needs his urgent attention. The POS operator will then consider his status and allow him to go only for the POS operator to later discover that he or she has been duped.

"He has been doing this within Ado Ekiti metropolis defrauding over 25 POS operators before men of the counter-terrorism unit launched a manhunt for him with their dragnet which paid of when he was arrested yesterday. Preliminary investigation showed that he is not a doctor but an okada rider,” the statement read in part." he stated.

Afolabi explained that the other suspect, Ekpako, was a former employee of a store in Ado Ekiti where he worked as a sales representative before he was sent on an errand with some money which he did not return.

He disappeared into thin air until he was tracked, traced, and arrested in Cross River State. The two suspects have confessed to the crime.

The state Commandant, Mr. John Olatunde Fayemi, warned POS operators and shop owners in the state to be careful of their workers and customers as the state command has been inundated with complaints bordering on POS fraud and stealing which is not too good for the state.

The commandant read a riot act to criminal elements in the state to either vacate the state or change from their evil ways as the command and her crime fighters’ units are ever ready to trace, track and arrest culprits wherever they are for the law to punish them accordingly.

He vowed that the suspects will be charged to court as soon as the command concludes investigations on the matter.