2023: Tinubu Didn't Do Anything Magical In Lagos, He Doesn't Have Experience To Lead Nigeria - Atiku's Campaign Spokesperson 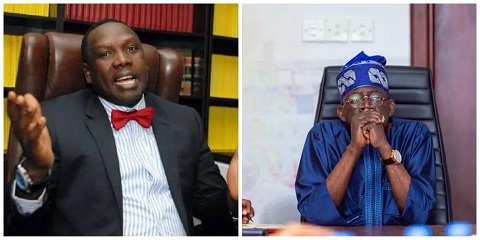 The Atiku Abubakar Campaign Organisation has said Bola Tinubu is inexperienced to lead Nigeria in 2023.
Tinubu is the Presidential candidate of the All Progressives Congress (APC).
In an interview with The Punch on Monday, the spokesman for the campaign organisation, Daniel Bwala, said Tinubu’s experience is only limited to Lagos State.
Bwala said that there is a vast distinction between the presidential candidate of the Peoples Democratic Party (PDP), Atiku Abubakar and Tinubu, saying that the two candidates are not on the same level.
He stated that Atiku is known for his experience as a former Vice President, while Tinubu is only known for his past and uncertainty.
Bwala, however, asserted that the country doesn’t need someone like the APC presidential flagbearer that will come and learn on the job.
He said: “My assessment of them is very simple. They are both gentlemen and are both Nigerian. They have worked on their energy and ideas over a period of time.
“However, there is a vast or marked distinction between both of them. When you mention one’s name, you will call it experience. When you mention his name, you will refer to the past and uncertainty.
“The problem we are confronted with as a nation now, honestly, is that we cannot afford the luxury of someone that will come to the job to learn. It has to be somebody that has experience. Asiwaju Bola Tinubu’s experience was limited to Lagos State. Lagos had already been a city of progress even before Asiwaju was born.
“There was nothing magical that he did in Lagos. The state was a colony even before Nigeria became a country, and Lagos would continue in its commerce and industry even if it were a state without a governor.
“You can’t use the yardstick of managing Lagos to say that automatically translates as experience in managing Nigeria. Do you know why? It’s because it is common knowledge in Nigeria that the legislative and judiciary branches of the state are like departments of government, the governors run them without independence and autonomy.
“Largely in a state, you govern one type of ideology and one type of direction. When you become a president or when you get the opportunity to work in national politics, you get the opportunity to be exposed to the diverse ways states of the federation operate and how to interrelate and manage them. That experience, Asiwaju doesn’t have. Atiku does.”
Bwala said Atiku led the privatisation process of the country in 1999 which opened up Nigeria’s economy as a free enterprise.
He added that the former vice president had the experience of dealing with other branches of government during his time in office.
Bwala said: “In the first four years of the administration led by Obasanjo and Atiku, remember that Obasanjo was flying all over the world to build consensus and get debt cancellation for Nigeria, and it was Atiku who was practically like a sitting president.
“He had experience managing governors and managing inter-relationships between states and the federation. He had the experience of dealing with other branches of government, like the legislative and judiciary branches. He had the privilege of establishing some of the reforms that brought about the institutions of government that we are all enjoying today.
“He led the privatisation process of the country, which opened up Nigeria’s economy as a free enterprise. So he has better experience than Asiwaju Bola Tinubu.
“In other words, when you mention their names, one is synonymous with experience; the other one is synonymous with going to learn on the job.”
Top Stories