According to a statement by the Forest Commission, the man jumped the security fence of the zoo and entered the inner fencing of the lions' enclosure on Sunday, August 28. 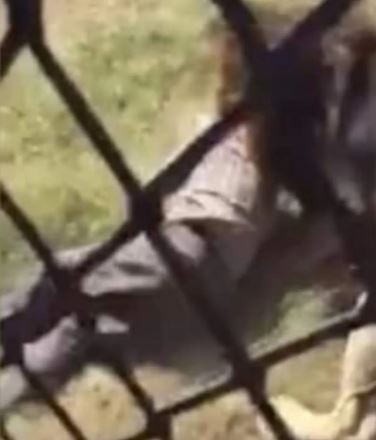 Tragedy struck as a man was mauled to death by a lion at the Accra Zoo in Ghana.

According to a statement by the Forest Commission, the man jumped the security fence of the zoo and entered the inner fencing of the lions' enclosure on Sunday, August 28.

One of the lions attacked and killed the man.

The statement said the man’s body has since been conveyed to the morgue while the lions have been secured within their enclosure.

It reads: "Around 12:00 hours today 28th August 2022, officials of the Accra Zoo on a routine patrol, noticed a middle-aged man (an intruder) had jumped the security fences and entered the lions enclosure of the Zoo. The motive of the intruder is yet to be determined.

"The intruder was attacked and injured by one of the lions, within the inner fencing of the enclosure. The intruder has been confirmed dead from injuries sustained and the body has been conveyed to the morgue."

The statement continued: "Accra Zoo authorities successfully coaxed the lions into a secure hold and invited the Achimota Police to convey the body and commence investigations.

"We wish to confirm that the lion, the lioness and the two (2) cubs remain secured in their enclosure at the Accra Zoo. Forestry Commission wishes to assure the general public that no lion has escaped from the Accra Zoo. The Deputy Minister of Lands and Natural Resources and the Chief Executive of the Forestry Commission Hon Benito Owusu Bio and John Allotey respectively, have n the Zoo this afternoon to ensure all facilities remain secure." 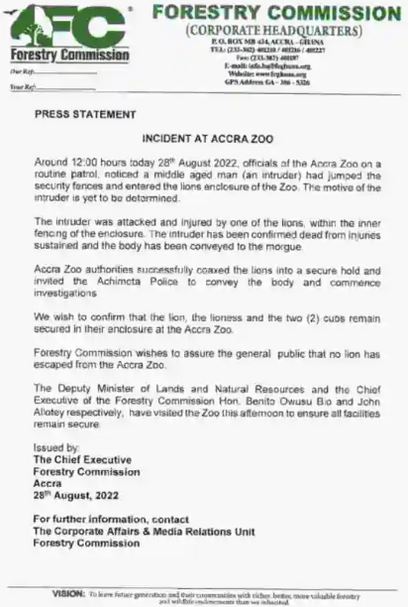