In a post shared on twitter, the lady @elvikioup said she was going to take legal actions after the near-death experience. 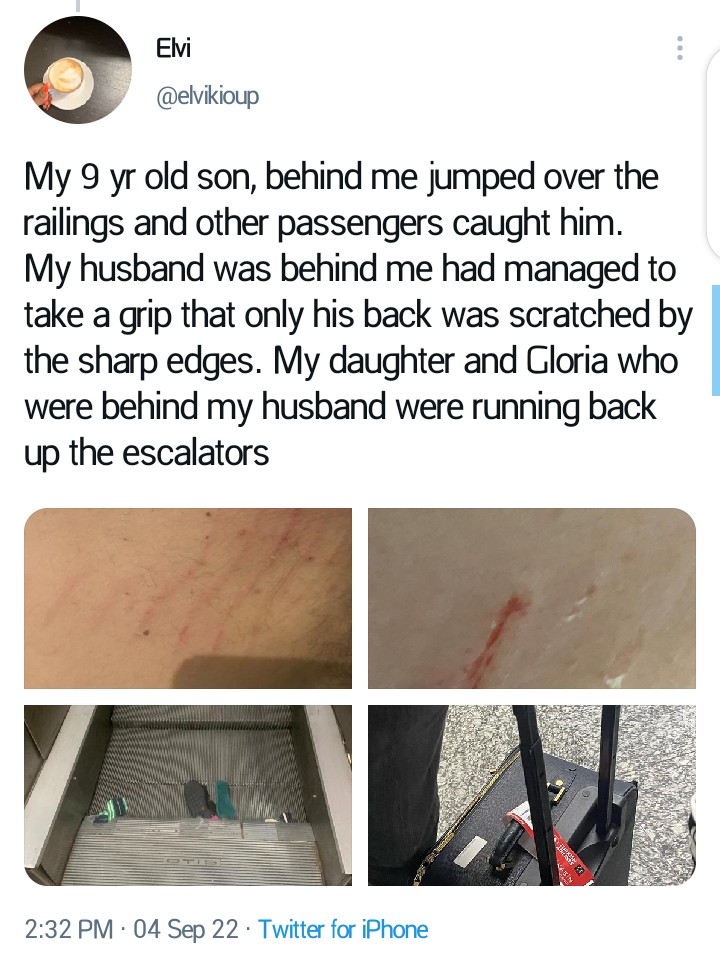 The Federal Airports Authority of Nigeria has tendered an apology after a faulty escalator injured a passenger at the Murtala Mohammed International Airport, Lagos.
A twitter user had narrated how she suffered a serious cut on her leg due to the faulty escalators at the MMIA, Lagos.
In a post shared on twitter, the lady @elvikioup said she was going to take legal actions after the near-death experience.
Writing on Twitter, she said:
On Saturday 3rd September 2022, I returned to Nigeria with my family. My excited 5 year old wanted to use the escalator instead of the stairs.
We travel around the world and escalators are normal to him. However, in the past I’d warned my kids not to use escalators in Nigeria (how sad). On this day, he wanted to and I insisted I hold his hand (there's no place in the world we go that I've held his hand on an escalator).
I noticed the razor-sharp edges of the escalator and it was going very fast. I looked down and the very fast escalator had people tumbling on themselves. Humans started piling on each other. My reflex, I lifted my 5yr old in the air, he spread his legs high while I lay on my back.
I joined the pile of humans at the base of the escalator. The only defense I had for myself was to raise my head so that only my back was bearing the grind of the escalators. A passenger snatched my 5yr old from me.
My 9 yr old son, behind me jumped over the railings and other passengers caught him. My husband was behind me had managed to take a grip that only his back was scratched by the sharp edges. My daughter and Gloria who were behind my husband were running back up the escalators
Eventually some people lifted me up at the base of the death-trap called escalators. The immigration officers that were looking at us, looked away while continuing with the job at hand on which passengers will be in a net, 'catch for the day'.
Despite the shouts, the wailing and pandemonium, everyone was going on with their activities. It took them over 40 minutes for first aid to arrive after my husband had shouted down the airport.
I remember when those escalators happened to a boy years before. That was why I warned my children, but my 5 year old was too young to remember.
I went to the hospital and I was given a tetanus injection. Gloria had an X-ray taken of her hand.The body ache, swelling on my back and legs is ongoing.
I wonder who certified and approved the safety/ use of these escalators. We were told that they were serviced a few days before. I am definitely going to sue . The state of those escalators is totally unacceptable.
As a citizen of this country and a consistent tax payer, I have the right to raise an inquiry into this matter and sue for damages. It’s more worrisome that protection, safety, support of human life is an outward neglect and negligence of the immigration officers at the airport.
This is an obnoxious show and dereliction of duty from the immigration and security official at the airport. It is also appalling that first aid came as the last aid after 40 minutes of this painful ordeal. I was bleeding and anxious to go to hospital.
I don’t think it should be a crime to come back to my country after a holiday abroad only to go through a near-death experience.
I will get to the root of the certification of these escalators legally.
My family is traumatized.
FAAN I’m coming!
Reacting, the Federal Airports Authority of Nigeria (FAAN) accepted full responsibility and apologised to the family involved.
Read FAAN press statement below:
Re: Life-Threatening Experience With Escalators at Murtala Muhammed International Airport, Lagos.
With respect to the above mentioned incident which occurred at the Murtala Muhammed International Airport, Lagos on Saturday, September 3, 2022, the Federal Airports Authority of Nigeria takes full responsibility for the unfortunate incident, and we hereby tender our apology to the family involved.
Accordingly, We have also reached out to actively participate in the care for the injured.
FAAN is reviewing the operating procedure for the equipment, to ensure that such sudden mechanical faults do not occur again.
FAAN......Committed to her core values of Safety, Security and Comfort.
Faithful A. Hope-Ivbaze (Mrs.)
Acting General Manager, Corporate Affairs

With respect to the above mentioned incident which occurred at the Murtala Muhammed International Airport, Lagos on Saturday, September 3, 2022,