Operatives of the commission stormed Damaturu on Wednesday evening and sealed off some of the properties on Thursday. 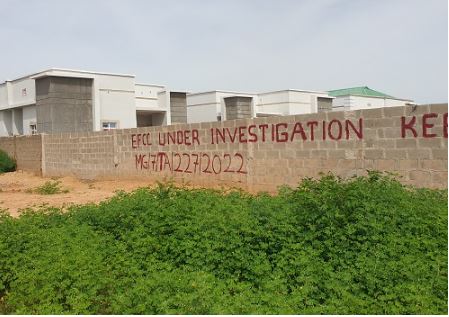 The Economic and Financial Crime Commission(EFCC) has sealed off over five properties belonging to the Auditor General of Yobe Local Government Pension’s Board, Mr. Yahaya Ado over suspected fraud allegation.

Operatives of the commission stormed Damaturu on Wednesday evening and sealed off some of the properties on Thursday.

A police source at the State CID said: “Yes, the EFCC come in on Wednesday and registered with us but they did not tell us where they were going or their mission.”

Some of the properties sealed, according to findings by our correspondent, include a massive estate of more than twenty flats behind the Sector II Operation Hadin Kai Headquarters in Damaturu; the FARSAWA Plaza opposite First Bank along Gashua Road; a Shopping mall under construction opposite Central Bank Damaturu along Gujba Road; a Housing Estate and another house close to the shopping mall and another building at Nyarnya Estate all in Damaturu.

There is no official statement yet from the EFCC on the allegations levelled Ado or the operation in Damaturu.

But investigations showed that the Auditor General has been a guest at the Commission’s office in Maiduguri at least for three times over suspected allegations of embezzlement and misappropriation of public funds.

An official of the commission, who spoke on the condition of anonymity, said: “We are still investigating the matter and as soon as we conclude our investigation, the public will be adequately informed.”

Reacting, the Auditor General described the EFCC action as as an embarrassment.

Ado said the EFCC should have done its homework on any allegation labelling or tagging other people’ properties ascribed to him.

He claimed he doesn’t know about some of the property attributed to him or their owners.

“Honestly, the EFCC is embarrassing me. The EFCC has gone ahead to be putting marks peoples’ property I do not know and the people themselves who are the owners of the property do not know why they are doing so but they are all linking the properties to me.

“This is very embarrassing because as a public servant, if somebody is challenged to have stolen public property, it is logical that such allegations should be investigated to know how the properties were acquired or stolen.

“But the EFCC did not do that; instead, they went about tagging every public asset said to be associated with that officer which himself does not know about the properties. This is becoming embarrassing to my person.”

Claiming some of the properties were wrongly linked to him, Ado said: “There is a housing estate behind the army headquarters. I don’t know who owns that property and they say the property belongs to me.

“There is another one at Nyarnya Housing estate which belongs to one wood seller called Markus but they tagged it that it belongs to me. I have never been to that area before in my life.

“There is another property along Potiskum road bearing FARSAWA Stores. They went to that place to also label it but unfortunately for them, they found the owner of the property and the man stopped them.

“It is expected that if anything of this nature should be done, there should be proper investigation before you go about labelling people’s property in the name of stolen property. If someone is being challenged that he has amassed wealth or he is corrupt by public money, then you have to prove that,” he said.

The embattled Auditor General said he has persistently explained to the EFCC how he made his money but the operatives keep coming for his head.

“I have been a sleeping partner in a business since 1996. My colleague is the active partner and we buy, store and sell beans. This is what I do to earn extra money for myself. I have defended all these things at the EFCC yet they keep coming after me.

“The position I hold as a public servant should not translate to every asset that I own. Like I said, I make extra money from the businesses I do. They have screened all my accounts in the office and even my personal accounts but they cannot find anything. There is only one account which they wanted to work on which they couldn’t get access to because we are still working with it. That is the account for the payment of pension and gratuity of the local government.

” Between man and God, no one has found anything and all the records are there. Let them check through, if one kobo is missing, let me be responsible for it. Working on hearsay doesn’t make this whole thing interesting honestly.

“All the times I visit the EFCC, I give them every information they request for and they even come down to verify it. I remember sometime there was an issue of N5m that the State Government gave me for my son who is studying aeronautical engineering in Latvia but they were not satisfied.

“They went to the scholarship board and got the same information. I really don’t know what I have done wrong as a senior civil servant. It has become a concern for me honestly.

“This is becoming embarrassing to me because I went into this service as a graduate and this year is my last year in the service. All the reputation I have built over these years and the good will I have is now been drawn to the disrepute and it’s really a thing of concern for me honestly.”