The protesters pitched a tent and blocked access to the Ministry of Defence located at Ship House on Olusegun Obasanjo Way in the country’s capital city. 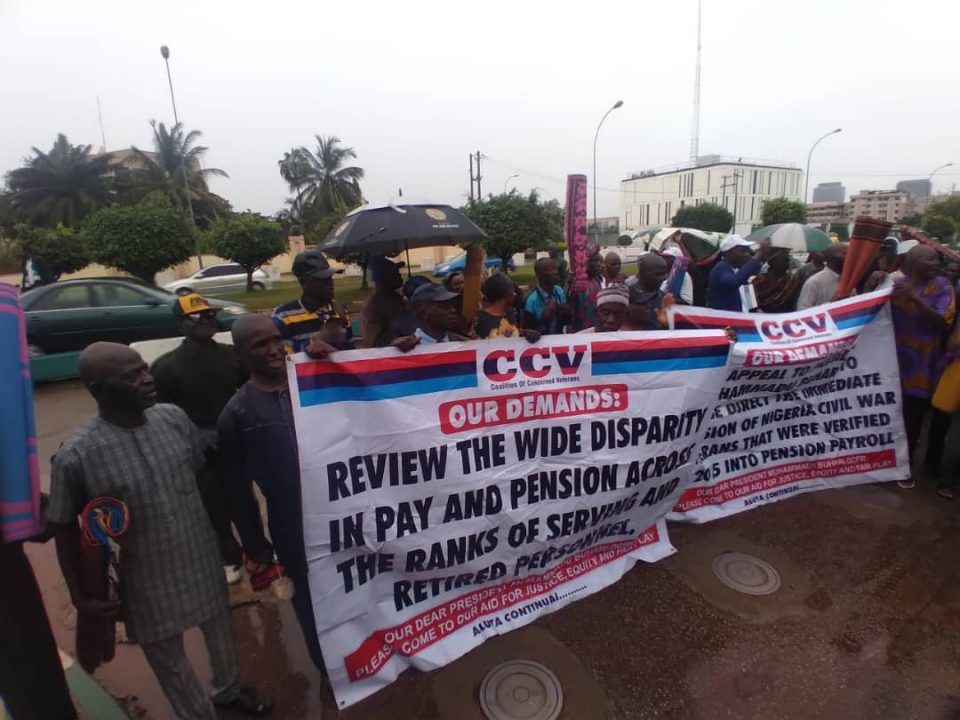 Retired soldiers have protested non-payment of their Security Debarment Allowance, among others, at the Ministry of Defence, in Abuja on Monday.
Military veterans under the aegis of the Retired Members of Nigerian Armed Forces and the Coalition of Concerned Military Veterans, staged the third phase of their protests on Monday.
They also blocked access to the Ministry of Defence located at Ship House on Olusegun Obasanjo Way in the country’s capital city.
The retired military men had in January this year, picketed the ministries of finance, defence, and the National Assembly earlier in, in pursuit of the same demand.
The National Secretary, REMENAF, Ambassador Roy Okhidievbie, who spoke to our correspondent during Monday’s protest, noted that the demonstration was to demand the payment of their security debarment allowance owed them by the Federal Government, adding that the Minister of Defence, Major General Bashir Magashi (retd.) had refused to disburse the allowances despite approval by the President, Major General Muhammadu Buhari’s (retd.) regime.
Okhidievbie said, “We have had meetings with the Defence Minister, Magashi, but he appears to be headstrong, heartless, and unperturbed concerning the grievances of retired military officers, as he never paid nor showed any interest or concern to pay these allowances, especially the Security Debarment Allowance.
“Interestingly, President Buhari-led regime has approved the payment of this allowance, but Magashi have refused to make disbursements.”
Also, the spokesperson for the CVV, Abiodun Durowaiye-Herberts, told our correspondent that Monday’s protest was focused on the non-payment of the Security Debarment Allowance, adding that they were determined to sleep over at the entrance of the Ministry of Defence.
Durowaiye-Herberts said, “We’re here, alongside our wives and children, and the widows of late military personnel and veterans who died in service, some of whom died fighting Boko Haram terrorists.
“We’ll be sleeping over at this place until the Minister of Defence, Magashi accede to our demands.”
A young woman, Anna Nanven, whose husband, a Corporal, was killed by Boko Haram terrorists during an attack on a military barracks in Borno State, 2015, told our correspondent that she had only received one allowance disbursement since her husband’s demise.
Mrs Nanven said, “My husband was a young man, a Corporal that was killed by Boko Haram terrorists during an attack on the barracks where he worked.
“I now live with his parents, and I bore five kids, three females and two males for him until his demise. The children are aged, 22, 20, 18, 15, and seven years olds, and the two eldest, both girls, that are done with High School can’t afford going to the University because I can’t afford their school fee.
“I am pleading that the President, the Minister of Defence, and Nigerian citizens come to our aid. I and my five children are suffering and living in poverty because I can’t afford starting a business, and I have no job.”
Top Stories