1 Dead, 15 Injured As Truck Falls On Bus In Abia


Eyewitnesses told Sunday Vanguard that the bus was negotiating a bad spot at the Alaoji spare parts market, when the container-laden truck which got stuck in the bad spot, fell on it. 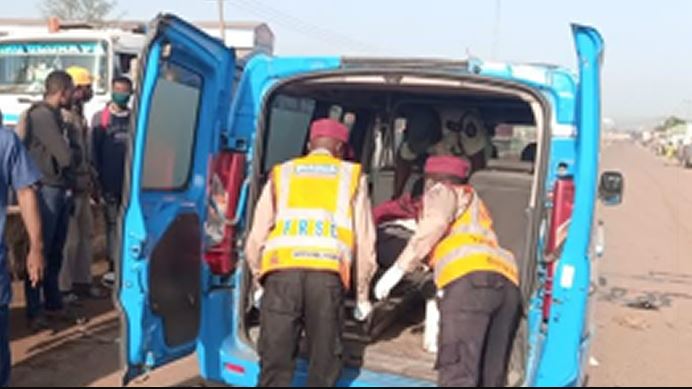 The tragedy struck as a container laden truck fell on a bus conveying 18 passengers in the area.

Eyewitnesses told Sunday Vanguard that the bus was negotiating a bad spot at the Alaoji spare parts market , when the container laden truck which got stuck on the bad spot, fell on it.

The eyewitnesses disclosed that about 15 passengers on the 18 seater bus which was on its way to Port Harcourt, were critically injured while one was confirmed dead on the spot. Sympathizers rescued the injured from the wreckage of the bus. Some of the critically injured were taken away in an ambulance to the hospital.

Sunday Vanguard gathered from the shop owners in the area that the incident came barely a few weeks after a similar incident led to the death of 8 persons along the Ugwunagbo council axis of the expressway.

“The driver of the bus loaded with 18 passengers and the container laden truck were negotiating the big pothole opposite the Alaoji spare parts market. They were moving side by side negotiating the big pothole when the container on the truck fell on the bus. 15 passengers were critically injured, 2 had no injury while one of them died as he was badly hit by the container. This accident that killed the young man and got many people injured was avoidable if the only government did a palliative work by just using stones to fill the potholes. Only one lane of the expressway is in use because the other one is no longer passable. There are too many containers that leave Onne into Aba daily. The condition of the road is too bad. Container trucks are falling on the road daily. Many people have lost their lives and properties due to container accidents caused by bad roads.”

A driver, Cletus Uzondu , lamented that an important road like the Aba-Port Harcourt was yet to be given serious attention by the state government because it has been called a federal road.

He said; “Customers from Rivers State especially Port Harcourt and others from Bayelsa must make use of this road. The federal government started rehabilitation work on the road but they stopped at Osisioma. The Abia state government who knows the importance of making Aba accessible to customers from Rivers and Bayelsa states should do something about the Ariaria Junction and Flyover Junction portions of this road.

“The road is already a death trap. Businesses no longer flow as usual because of this road? Just a few weeks ago, eight lives were lost on the same road and many others were injured. From Ariaria Junction to Alaoji is not up to five minutes but it can take two hours because of bad roads. From Ihie town to Ngwaihiekwe axis, you’ll see drivers shifting from one part of the road to another falling recklessly because of the nature of this road.”

Mrs Hellen Moses, a customer who comes from Bayelsa to Ariaria international market to buy goods, explained that the accidents had increased since the federal ministry of transport stopped the trains conveying traders from Port Harcourt and Aba.

“If the trains were still running, lives won’t be lost the way it is happening on this deplorable federal road. If the federal government can’t complete the Aba- Port Harcourt section of the Enugu –Port Harcourt expressway. The areas from Enugu to the Osisioma flyover have been completed. But the section from Tonimas junction to the Abia- Rivers state border is a death trap. If the federal government is not yet ready to complete it, they should allow the trains to continue running from Aba to Port Harcourt. This will stop the killing of passengers by container laden trucks along the dilapidated expressway,” she said.