Akinremi, a retired Commissioner of Police, said the suspects were arrested on September 30 in a storey building in Idiroko, Ipokia Local Government Area of Ogun. 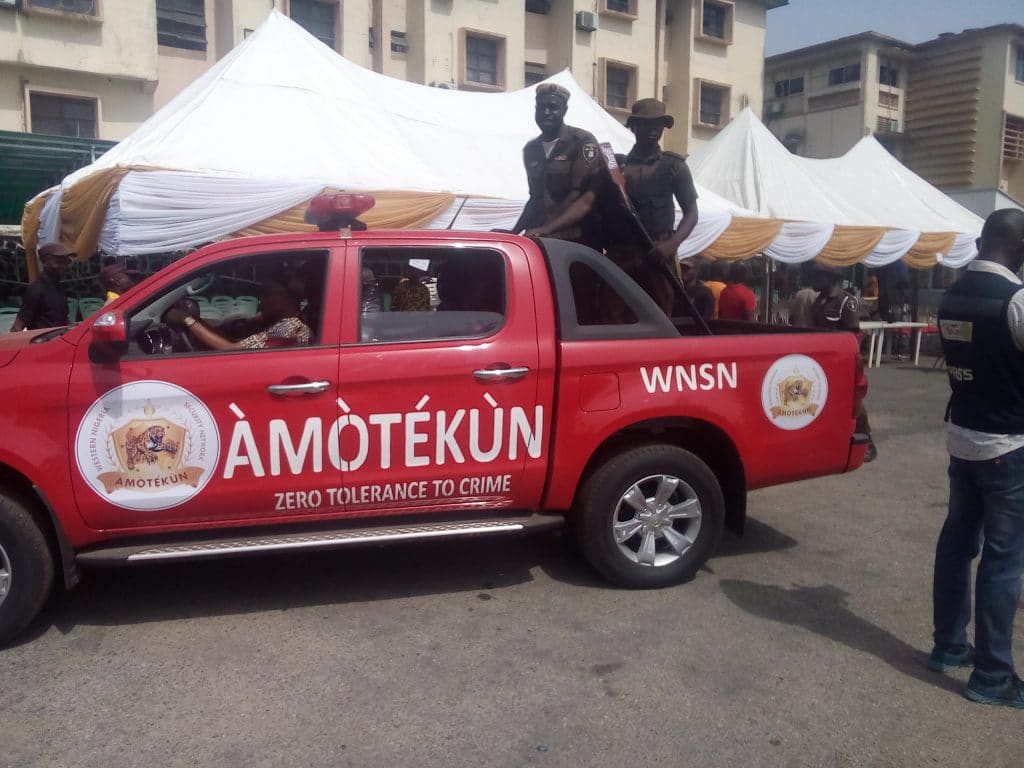 Seven men and one lady have been arrested by the Amotekun Corps in Ogun State.

They were arrested for allegedly obtaining a sum of N15 million under false pretence.

Akinremi, a retired Commissioner of Police, said the suspects were arrested on September 30 in a storey building in Idiroko, Ipokia Local Government Area of Ogun.

Their arrest, Akinremi said, followed “a tip off on suspected criminal activities of about 100 young men and women which were of security concern to members of the public in the neighbourhood.”

While infiltrating into their ranks, the corps had received a complaint from one Mr Sheriff Mohammed, who claimed to be a student of the Federal University of Agriculture, Zura, Kebbi State.

Mohammed had complained that he was defrauded to the tune of N600,000 by some of the suspects under the guise of facilitating his educational pursuit in a university owned by QUINET IM Nigeria Bulldozer Venture.

According to the complainant, he was introduced to the syndicate by his elder brother.

According to him, sometime in December 2021, Hounkpe Stephen asked him to come from Kebbi State to Parakou, Benin Republic, with the sum of N600,000 to enable him to facilitate the continuation of his education in a university owned by the said company.

On December 27, Stephen and one Toheeb (now at large) made away with the money.

The victim, according to Akinremi, later discovered that no university admission was processed for him, and when he demanded a refund of his money in September 2022, he was allegedly beaten by the suspects.

“His bag, which was containing his NECO, WASCE O/Level and Primary School Leaving Certificates including the sum of Fifty Three Thousand Naira (N53,000.00) were stolen by the suspects from him,” Akinremi told DAILY POST.

It was gathered that when the syndicate’s activities became suspicious in the Benin Republic, the Beninoise authorities dislodged them; hence, they relocated to Idiroko, where they continued their activities.

The Corps Commander added that after the arrest of suspects, another 10 of their victims had appeared, making allegations of having been defrauded in similar circumstances.

“Peliminary investigation has revealed that over N15million has been obtained by members of the syndicate both in Benin Republic and Nigeria,” it was said.

On interrogation, the suspects were said to have admitted receiving various sums from the complainants, saying, however, that it was for an online business with a company domiciled in Malaysia.

According to them, “when the monies were collected in cash, they handed over same to one Mr Bruno (now at large) who is their boss and he, in turn, converted it to American Dollars and paid into an account which they are not privy to.”

While making efforts to get the said leader of the syndicate, the arrested suspects and exhibits recovered from them are being processed to the Police State CID for further investigation, the Amotekun Commander stated.