Photo Of 30-Year-Old Yahoo Boy Who Was Docked In Ilorin For Alleged N39.7m Fraud


The defendant was arrested and found to be in possession of one iPhone 14 Pro Max and three cars including a Toyota Corolla 2005, Mercedes Benz GLK 2010 and Toyota Camry 2013. 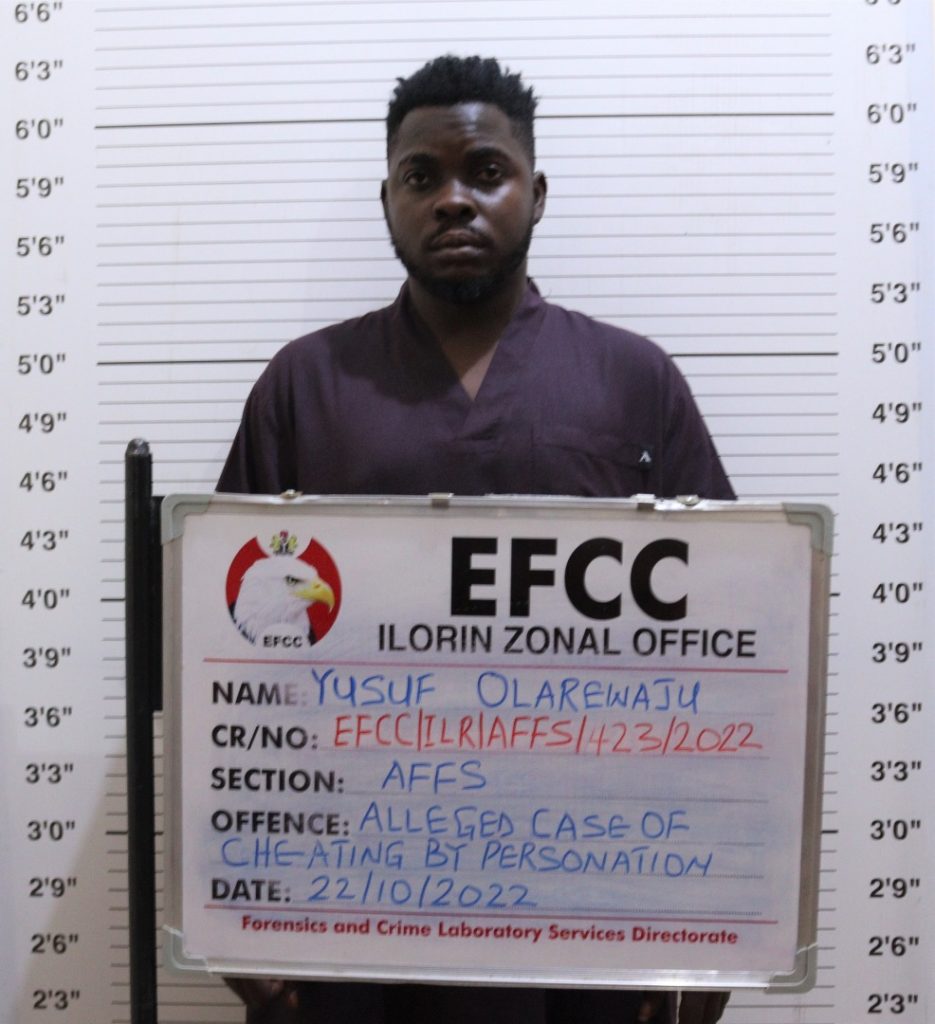 Yusuf Yusuf Olarewaju, a 30-year-old man, has been dragged to court.

The man, on Friday appeared before Justice Adebayo Yusuf of a Kwara State High Court in Ilorin charged with internet fraud-related offences.

Arraigned by the Ilorin Zonal Command of the Economic and Financial Crimes Commission, EFCC, on a one-count charge, Olarewaju, a native of Erin-Ile in Oyun Local Government Area of Kwara State, was arrested on October 23, 2022, following actionable intelligence about the activities of some fraudsters operating in the town.

The defendant was arrested and found to be in possession of one iPhone 14 Pro Max and three cars including a Toyota Corolla 2005, Mercedes Benz GLK 2010 and Toyota Camry 2013.

Investigation revealed that Olarewaju, while using a fraudulent email, [email protected] posed as one Smith Katie, a white female from Missouri, USA, to strike relationships with one James Gibson (Jimmy) and Stephen Speer, both of whom he swindled to the tune of $30,000 between 2021 and 2022.

The defendant confessed to the crime and was consequently charged to court by the anti-graft agency.

The charge sheet read: “That you, YUSUF YUSUF OLAREWAJU, sometime between 16th January 2022 and 13th October 2022 at Erin-Ile, within the judicial division of this Kwara State High Court, did knowingly had under your control, the gross sum of N39,722,319 deposited in your Guaranty Trust Bank Ltd account number 0226365092 which is reasonably suspected to have been unlawfully obtained and thereby committed an offence contrary to and punishable under Section 319 (a) of the Penal Code Law.”

Upon his guilty plea, counsel to the EFCC, Andrew Akoja reviewed the facts of the case through a witness, who narrated the circumstances leading to the arrest of the defendant.

The witness, who is an operative of the EFCC, tendered some documents including the device used as an instrumentality of the crime and the keys to the cars recovered from the defendant, which were admitted in evidence.

Akoja, thereafter, urged the court to convict the defendant based on his unequivocal plea of guilt and the uncontroverted evidence of the prosecution’s witness.

However, Olarewaju’s counsel, M. A Bello, cross-examined the prosecution witness to the effect that, the defendant had left “yahoo business” in January 2022, and that the cars recovered from him were intended to start up a car business.

Justice Yusuf adjourned the case till November 23, 2022, for judgment and ordered the remand of the defendant in the custody of the Nigeria Correctional Service, Ilorin.