Oshiomhole spoke on Wednesday at the inauguration of a flyover in Port Harcourt, the Rivers capital. 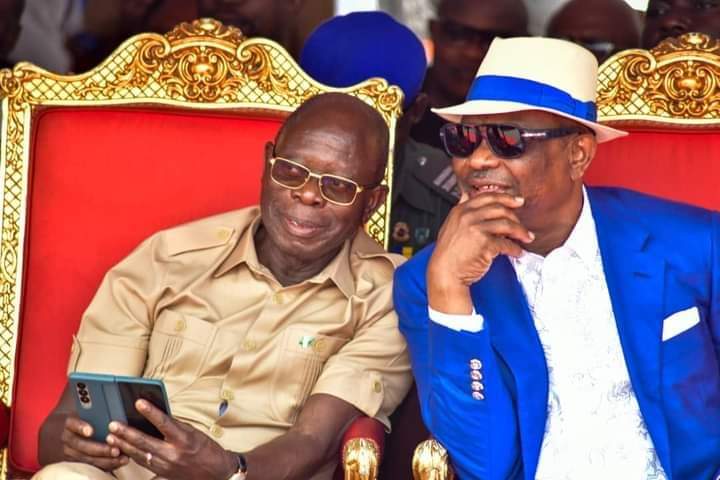 A former national chairman of the All Progressives Congress (APC), Adams Oshiomhole, has spoken about Nyesom Wike.

He says he prays that more people like Nyesom Wike, governor of Rivers, come into governance.

Oshiomhole spoke on Wednesday at the inauguration of a flyover in Port Harcourt, the Rivers capital.

The former governor of Edo said people like Wike will fight for what they believe in.

“It is my hope and prayers that more people like you (Wike) will come into governance, because a country cannot be led by people who can’t sustain a fight in what they believe in,” he said.

The former APC national chairman lamented that some southern governors reneged on their agreement on supporting a southerner to become president in the 2023 elections.

“They voluntarily decided to meet across party divide, PDP and APC governors. They met in Asaba and they were hosted and they had dinner,” he said.

“They might have had champagne, but the takeaway that was communicated to us was they are united on one issue on where the next president should come from.

“It is an agreement. You are expected to obey your agreement. Me, I’ll stand by my agreement.”

“They want people who can predict their actions, but a small section of the political elite don’t want straightforward talk,” he added.

Oshiomhole’s comments come amid a crisis involving Wike and his allies in the Peoples Democratic Party (PDP) over calls for Iyorchia Ayu to step down as PDP national chairman.

The calls have been based on party stakeholders insisting that the PDP presidential candidate and the national chairman cannot be from the same region.

Meanwhile, following Wike’s loss at the PDP presidential primary to Atiku Abubakar, the Rivers governor had accused southerners of working against the region getting the ticket for the party.