Why I'm Neither A Christian, Muslim Nor Orisa Worshipper - Wole Soyinka Speaks


He stated this on Sunday, 20 November at the public presentation of his two-volume collection of essays, Of Power and Freedom and the forthcoming release of a collection of poems. 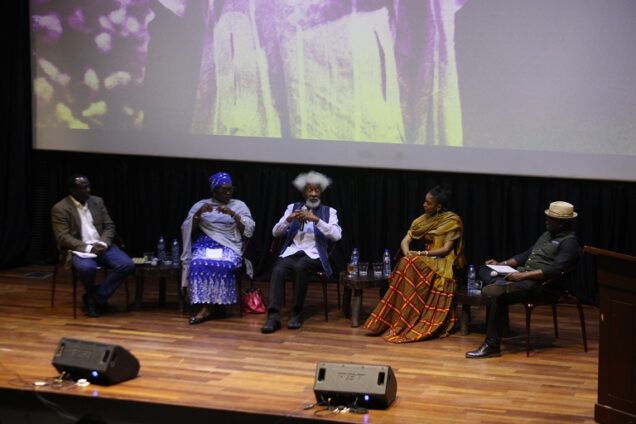 Professor Wole Soyinka, the world-famous Nigerian Nobel Laureate, has opened up about his life.

He said he is neither a Christian, Muslim nor an Orisa Worshipper.

He stated this on Sunday, 20 November at the public presentation of his two-volume collection of essays, Of Power and Freedom and the forthcoming release of a collection of poems.

The event, which was tagged A Special Soyinka Retrospective held at Alliance Francaise, Mike Adenuga Centre in Ikoyi, Lagos.

Soyinka was responding to a question which Mr Kunle Ajibade, journalist, writer and Executive Editor of TheNEWS/PMNEWS asked him from the audience during the Q&A session.

Ajibade asked: “You say in one of the essays in Of Power and Freedom that you are not a Christian, you are not a Muslim and you are not an Orisa worshipper. And that you use the gods of these religions merely as mythological constructs. But what exactly is your religion?”

To which Soyinka replied that he was neither a Christian, Muslim or an Orisa Worshipper and had never felt he needed any religion.

According to him, he does not worship any deity but that he considers deities creatively real and are his companions in his journey in both the real and immaginative worlds.

Nobel Laureate Professor Wole Soyinka answering questions from the audience on Sunday, 20 November at the public presentation of his two-volume collection of essays, Of Power and Freedom and the forthcoming release of a collection of poems at an event tagged A Special Soyinka Retrospective held at Alliance Francaise, Mike Adenuga Centre in Ikoyi, Lagos (Photo: Ayodele Efunla)

The Nobel Laureate, who stopped short of saying deities are mythological beings people create or project, also said he is a mythologist and believe that people have a right and cannot help creating mythologies around themselves, their experience about what they project from the inner recessess of their minds as answers to questions.

Soyinka said; “Do I really need one (religion)? I have never felt I needed one. I am a mythologist. I believe that people have a right and cannot help creating mythologies around themselves. , around their experience about what they project from the inner recesses of their minds as answers to questions.

“And so I find nothing wrong with utilizing mythologies as part and parcel of my creative warehouse.

“But religion? No I don’t worship any deity. But I consider deities as creatively real and therefore my companions in my journey in both the real world and the imaginative world.

The Q&A session was the concluding part of the programme which had a panel of discussants do justice to exciting discourses around the life and works of Soyinka.

Amkpa’s discourse revolved around the threat people pose to humanistic ideals in Africa and the globe by their nefarious activities and evil acts against their fellow humans. He posed a question echoing what had been asked earlier in Rome, whether Soyinka was the last humanist standing.

The Nobel Laureate said it was not a question of the last humanist standing and decried the acts of evil the Russian President is currently committing against the Ukranians in the name of territoriality, war and self glorification.

Soyinka also regretted the atrocities Nigerians and Africans commit against one another in the name of religion, citing the adoption of the Chibok girls in 2014 as well as the matyrdom of Deborah, the student who was lynched and burnt to death by her fellow students.

The distinguished writer then said Africans lack the moral right to criticize the brutish acts people like Putin are committing against the Ukranians or the whites against blacks in Americans, adding that the lives of Africans matter too.

“And so when we reach a stage where what is happening here on this continent, in this country and we get to that level where the human quotient os relegated to mere statistics, to mindless, bloodless, fleshless statistics then it is time to invoke the often neglected humanist sense of relationship to other human beings as well as to the environment that we live in.

“For me the captivity of those students . I don’t know which is more horrifying, the capture and enslavement of those people or isolated events like the martyrdom of Deborah who was lymched, not merely lynched which was bad enough. Lynched by her fellow students brutally in broad daylight in the presence of state security officers. Bad enough.

“And then you have the head of a respected religion, of a world religion like Islam, the representative of that religion in Nigeria, who is the head mullah of the mosque in Abuja, the capital of Nigeria, applauding the act.

“Then you just wonder is it possible for us in Africa to point in the direction of Ukraine, to feel horrified, to become humanely involved that we see an atrocity like that taking place amd being applauded right on our own soil? You just wonder where the human has gone in us.”

Ndibe who spoke via Zoom from the United States discussed collective memory in its relation to the present.

“In your collection of essays there is this line that stood out for me, that I think encapsulates your ethical practice. And you said that history must not be allowed to gather cobwebs and that history requires constant evocation as contemporary touchstone. I like for you to elaborate on this: the role of memory in keeping historical experience in focus for people.

“Because there is this sense that whats is the past in a lot of ways is past and history of course imstructs amd informs the present. I was struck by this stipulation by you that history requires a constant evocation in contemporary touchstone. So please could you elaborate on that?” Ndibe asked.

And to which Soyinka replied: “I think by memory you talk about collective memory, not just individual memory. Because collective memory is the key, is that memory which is related to the mechanisms of relating reality to whatever narrative is given to us. Because history is the narrative.

“But the collective memory, the active memory, is for me far more important . It is also the more dangerous. Because you can get trapped in it as a community.” Soyinka also condemned the removal of history from the curricula in Nigerian schools.

Rezinat on her part interrogated the place of women in Soyinka’s works, notably in a text such as The Lion And The Jewel. While Achalugo, among other things spoke on her first encounter with Soyinka when she presented her first novel to him and which went a long way in debunking her earlier impression of him as a trouble maker and one who does not go to church.

She also spoke about the place of spirituality, of African traditionally religion and culture in literature and how it is demonized by adherents of the Christian religion. Soyinka debunked the demonization adding that there is nothing evil about Eshu, for instance but was cast in a bad light by the European colonialists in order to demonize it.

Ipadeola, however questioned the idea of putting Soyinka poetry on a time frame, adding that to him the Nobel Laureate’s poetry is not only timeless but a thread runs through them. He also expressed his fascinations with Soyinka’s poems such as The Telephone Conversation, Her Joy Is Wild, Unlimited Liability Company and hope that they are in the new collections of poems

The event, a concluding part of the week-long annual Lagos Book and Art Festival, LABAF, was moderated by Mr Jahman Anikukapo, journalist and former editor of The Guardian on Sunday.