Former State Coordinator, NPLWH, Elder Francis Osayande, said they found it difficult to access care, following the demolition of the Central Hospital Benin, where most of them received treatment. 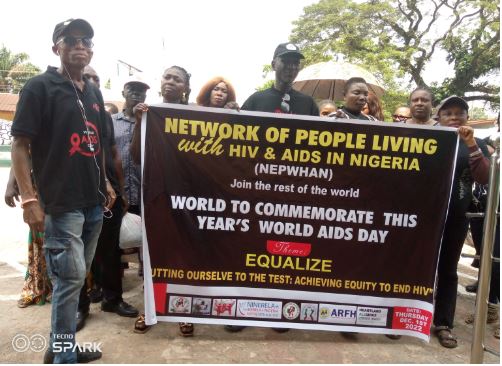 The Network of Persons Living With HIV/AIDs (NPLWH) has staged a protest in Edo.

The NPLWH stage a peaceful protest over what it described as inadequate care in Edo hospitals.

Addressing journalists at the Secretariat of the Edo State Council of the  Nigeria Union of Journalists, former State Coordinator, NPLWH, Elder Francis Osayande, said they found it difficult to access care, following the demolition of the Central Hospital Benin, where most of them received treatment.

“December 1 is a day of celebration for persons living with HIV/AIDs but today, we are mourning because we are finding it difficult to access treatment following the demolition of the Central Hospital.

“We no longer get the care and treatment we normally received at the Central Hospital before the demolition. We hardly see qualified  doctors as those that were attending to us had been tranfered since the demolition of the hospital.

“They moved our centre to the Sickle Cell centre but we are finding it difficult there, because we don’t have enough space. Each time we go there, we are made to stay under the sun and we have to waite for several hours before we can even access care,” he said.

He also alleged that the state government was planning to merge the Edo State Agency for the Control of HIV/AIDs (Edo SACA) with the Edo State Primary Healthcare Development Agency (EDSPHCDA).

He said the alleged proposed merger would further worsen the situation of the members, adding that the primary healthcare was struggling to survive in the state.

“Over 30,000 persons are living with HIV/AIDs in Edo State. Government should give us a conducive place where we can have access to good healthcare,” he said.

He appealed to the state government to, as a matter of urgency, constitute SACA board for the proper coordination of the agency.

The association also urged the government to make access to healthcare easy for its members in Auchi and its environs.