EFCC Auctions Over 190 Vehicles Forfeited By Fraudsters In Abuja, Ibadan, 4 Other Nigerian Cities


The exercise was preceded by a public inspection of the displayed photographs of the assets on Monday, December 12, 2022, where potential bidders viewed and identified the vehicles of their choice. 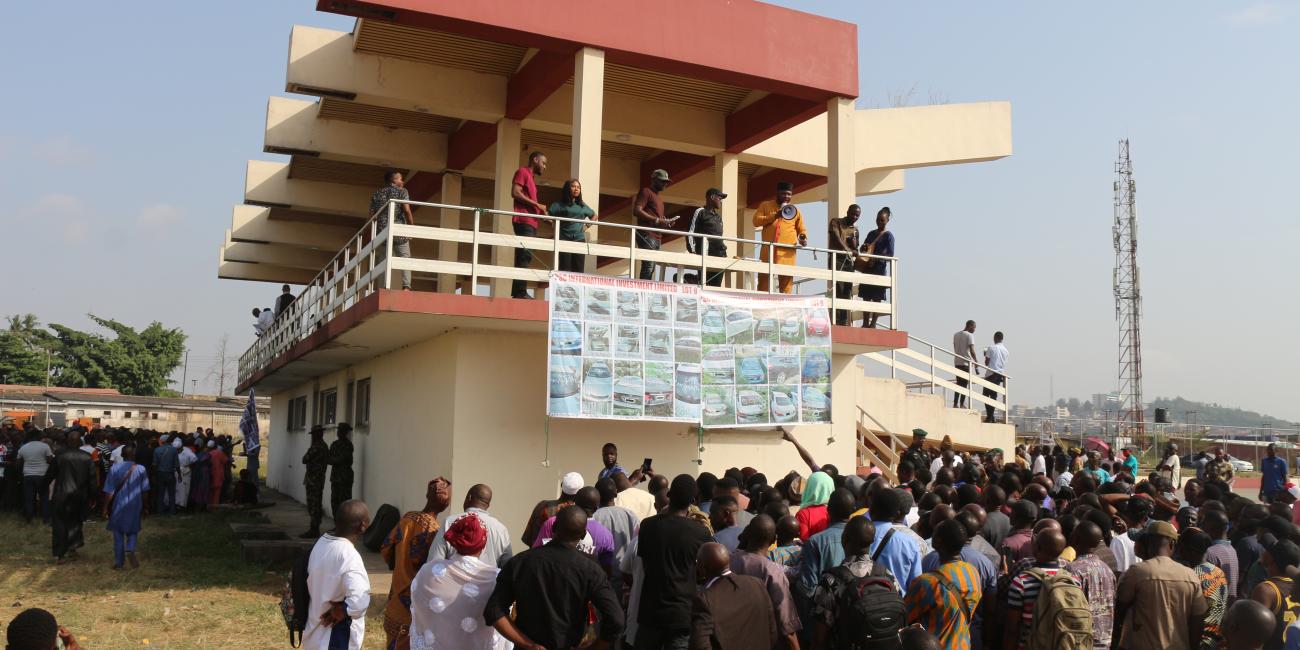 The Economic and Financial Crimes Commission on Tuesday conducted a public auction of over 190 vehicles and electronic devices at its zonal offices in Abuja, Benin, Port Harcourt, Kano, Ibadan and Uyo.

The exercise was preceded by a public inspection of the displayed photographs of the assets on Monday, December 12, 2022, where potential bidders viewed and identified the vehicles of their choice.

The auction proper commenced in the early hours of Tuesday, December 13, 2022, with various licensed auctioneers taking charge of the exercise at the designated centres, a statement issued by its spokesman, Wilson Uwajaren on Tuesday said.

The statement said at “Paragon Demonstration School, Limit Road, Benin City, scores of potential buyers bid for the 20 vehicles slated for auction”. It noted that the process began at 10 am with the auctioneer putting the first car on sale to the highest bidder.

One of the bidders, Odiase Itua, called for a limit to the amount people can bid. According to him, some bidders intentionally raised the stake to frustrate others from winning.

"I was shocked by what I saw. The amount was too much," he was quoted as saying.

In Ibadan, the Oyo State capital, “where 80 vehicles were auctioned, the exercise took place at the Adamasingba stadium, Ibadan, with a member of the EFCC Asset Disposal Committee and Director, Proceeds of Crime Management, CE Aliyu Yusuf on hand to coordinate the activities of the three licensed auctioneers, PSC International Investment Limited, Aikson Nwonkwo D.S. and Aliyu A. Kiliya &Co, selected to conduct the auction”.

The statement read, “In a brief remark before the auction, Aliyu reiterated the integrity of the arrangement as well as the Commission’s determination to ensure the exercise was transparent.

“He charged bidders to be disciplined and follow the approved guidelines for a seamless auction.

“The exercise in Uyo took place at the National Agricultural Land Development Authority, NALDA, along 4 lanes in Uyo, Akwa Ibom State. It began at about 9.45 am and ended around 12. 35pm with 9 cars, two trucks, 11 computers and 9 mobile phones changing hands in an open and transparent bidding process conducted by Trevamteck K & G Limited, the auctioneer.

“Dr. Nnamdi Enenwa who won a Mercedes-Benz C-Class said he was impressed with how the Commission conducted the exercise. "I was here at the venue yesterday during the inspection and today we came back for the auction exercise and it went very well. It was really well organized” he said.

It added that in Kano, “two cars, 16 mobile phones and one laptop were offered to the public by auction, while 35 vehicles, computers and electronic devices were put up for sale in Abuja, where hundreds of bidders participated in the exercise at the Car Park A of the Wuse Zone 2 office of the Commission”.

It said, “According to Simon Idoko, a participant, the registration process went smoothly, though the crowd was a bit unruly.

“Bidding started at about 1 pm and ended a few hours later with one R. Lawal the lucky winner of a Ford Explorer.

“The ongoing sale of forfeited assets by the EFCC, began on December 6, 2022 at the Lagos Command of the agency.

“Speaking during the exercise, Commander of the EFCC, CE Osita Nwajah, a member of the Asset Disposal Committee, said the EFCC gave the exercise wide publicity to ensure full participation by citizens.

“’We gave this exercise very wide publicity because we want total Nigerian participation. There is no hanky-panky, there is no underhand tactics. Everything that is done here is open and transparent, we want to be accountable to the Nigerian people.’”