Tambuwal sent a word of warning to the Rivers governor and others allegedly planning to go against the interests of the PDP. 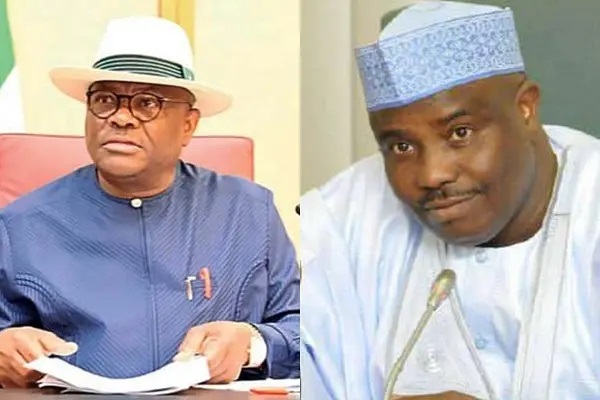 Governor of Sokoto state, Aminu Tambuwal has warned Governor Nyesom Wike of Rivers state and his other G-5 governors that the Peoples Democratic Party will take action against them over their plan not to support the party's flagbearer, Atiku Abubakar.
Since his emergence as the PDP presidential candidate earlier this year, former Vice-President Atiku Abubakar has faced apathy from five PDP governors under the aegis of the G5 or Integrity Group, including Wike, Okezie Ikpeazu (Abia), Samuel Ortom (Benue), Ifeanyi Uguwanyi (Enugu), and Seyi Makinde (Oyo). They argue that the PDP National Chairman Iyorchia Ayu, a northerner, must resign.
Responding to allegations of meetings being held with the presidential candidate of the All Progressives Congress (APC), Bola Tinubu, Wike said on Friday that he and his allies in the G5 had not struck a deal with any presidential candidate ahead of next year’s election.
However, Tambuwal sent a word of warning to the Rivers governor and others allegedly planning to go against the interests of the PDP.
"The Peoples Democratic Party (PDP) will respond to the antics of five of its Governors currently being speculated to be in political dalliance with the presidential candidate of the All Progressives Congress (APC), Bola Ahmed Tinubu,” Tambuwal’s Special Adviser on Media and Publicity, Muhammad Bello said in a statement on Friday.
For hours before his remarks there has been reports that the G-5 PDP Governors led by Governor Nyesom Wike of Rivers state have been meeting with Tinubu in London on the possibility of their teaming up to work for his victory in the forthcoming presidential elections
According to Governor Tambuwal, who is also the Director General of the Atiku/Okowa presidential campaign organization, the PDP is a law abiding party; and it would explore lawful avenues to bring any of its erring members to book.”
Tambuwal was quoted as saying he engages in political engineering and political negotiations with the G5 members, whom he described as “good colleagues.”
It is not a war of attrition. I always submit that in this our business, whatever it is that you are doing , even if you try to hide it, it will come out. You cannot plan and execute a political project in your own bedroom. You must come out with it.
So, when my colleagues resolve on what to do, I think it is then that the party will now respond on whatever position they have taken,” he said
Top Stories