Nigerian Soccer Legend, Kanu Nwankwo Reveals What Matters To Him Much More Than Football


One of Nigeria's most successful football players of all time, Kanu Nwankwo, has revealed what matters more to him than football. 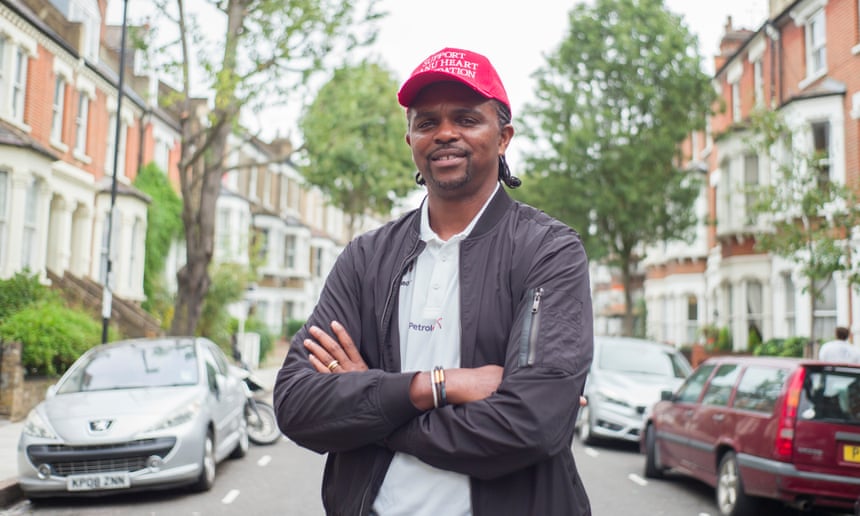 Kanu Nwankwo
The former Arsenal striker on how his heart problem inspired him to set up a foundation and why clubs should do more to monitor their players’ health
Nwankwo Kanu remembers the shouting, the confusion and the overriding sense of desperation. A woman had brought her gravely ill daughter to him, feeling she had nowhere else to turn, and now she was begging him to save the child’s life. Then the little girl collapsed. “We had to pick her up and run to the hospital,” Kanu says. “Thank God she didn’t die.”
It was the year 2000 and Kanu had just set up his eponymous heart foundation, having undergone a life‑or-death scare himself in 1996. The girl’s mother had read the publicity and tracked the footballer to the Nigeria team hotel, where the squad were preparing for an Africa Cup of Nations game.
“The mum wanted to show me the girl for me to help,” Kanu says. “When she saw me at the hotel, she was shouting and suddenly the girl fainted. Later on at the hospital I promised the mum that the first kid we were going to operate on would be her daughter.”
The girl’s name was Eniton and she was among the first children that the Kanu Heart Foundation took from Nigeria to London for surgery at Great Ormond Street hospital.
“For a little girl of that age – not playing, no energy in her, not moving around; she doesn’t smile, the eyes are blue. They are really suffering, in a really bad situation, and you ask yourself: ‘If nobody comes in to help and they die …’
“But after all of the children had their operations, I went to visit them and they were full of smiles, jumping and playing with me, rolling around with me and when you looked at the mums, you saw the happiness. From that day, I said: ‘This is something that we have to do more and do more.’” 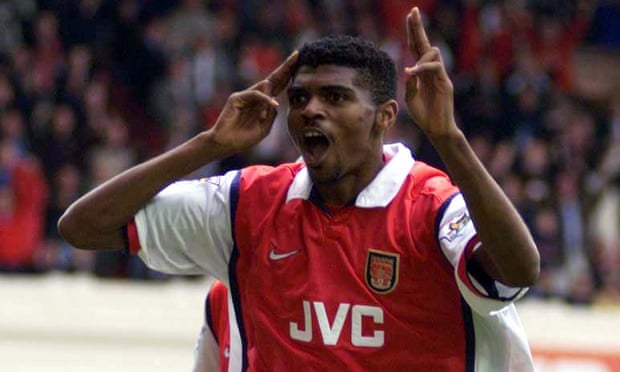 Nwankwo Kanu celebrates scoring against Aston Villa in 1999 in his Arsenal heyday. Photograph: Toby Melville/PA
There is a beautiful update to Eniton’s story – she is about to graduate from Lagos State university, where Kanu has helped to pay her fees. But the foundation has saved the lives of many more children from underprivileged backgrounds in Africa and Kanu is proud to reveal the precise figure.
“We have saved 542,” he says. “But we keep doing it. This week four patients went to Sudan and we’re hearing that the operations were successful and another six are about to leave as well.
“We have partnered with hospitals, we do check-ups, we talk to the parents, we educate them and at the same time we take the kids to other countries for operations. The goal of the foundation is to build our own cardiac hospitals in Africa, starting in Nigeria. It would make it all much easier. As a footballer you win trophies and it’s good. But this is so much more.”
Kanu has always been a guy to stand out and he does not go unnoticed in Hertfordshire, where he lives with his wife and three children. He jokes that he intended to kick back and relax on his retirement as a player in 2012 – “I thought: ‘OK, it’s holiday time,’” he says – but he is too philanthropic, too driven to make a difference, for that. 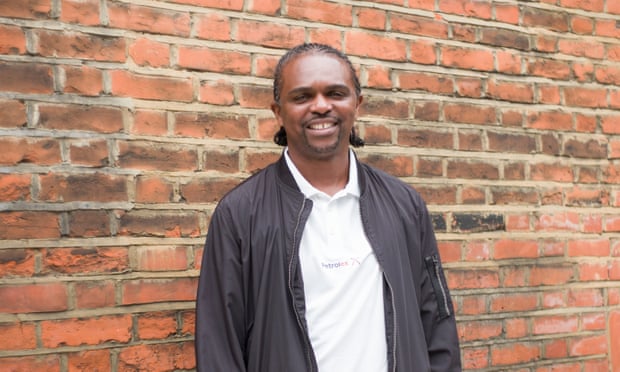 Kanu played for Nigeria at three World Cups. Photograph: Graeme Robertson for the Guardian
The 42-year-old is an ambassador for the Nigeria Football Federation and he also works for Fifa as an ambassador. “I am called a legend and people see me as one but because of that I don’t think I should have to hide at home and only go on holidays, drink champagne and watch TV,” Kanu says. “I am somebody that wants to impact on to people’s lives.”
Kanu’s labour of love remains his foundation and with more time on his hands, he has been able to give more of himself to the raising of funds and awareness. His latest initiative is a charity match to be played at Barnet’s Hive stadium on Saturday 30 September between African and Premier League players. A host of big-name ex-professionals have signed up, including Jay-Jay Okocha, Sol Campbell, Teddy Sheringham and Robert Pires.
Kanu was shaped by his tough upbringing in Imo state, where money was tight and barefoot street football the norm. He does not forget his roots and after he joined Ajax from Iwuanyanwu Nationale, he says his “first priority was to help those back home that didn’t have anything”.
He adds: “I am a sportsman so what do you do? You try to advise other young ones that are coming through. You take boots and jerseys back home. You create an academy. You help them with their school fees.”
Kanu’s outlook would only harden during a hellish month that followed his move from Ajax to Internazionale and, when he retells the tale, it is heavy on remarkable detail. For some reason he had played in two pre-season friendlies for the Italian club before he took his medical but when he did, he was immediately stood down from the next one. No one told him why and he was in the dark until the following morning. That was when he switched on the TV.
“What they reported was that I had an issue with my heart and couldn’t play football any more,” Kanu says. “It was in the national papers in Italy as well. That’s how I found out – through the news. Later on, Inter came to tell me that, yeah, this was the situation. I said: ‘I have already heard about it.’ It was a big one – and for it to be revealed in such a manner. It should not have been like that. At that moment, everything was upside down for me.”
Kanu was lucky that the problem with the aortic valve showed up at the medical and he owed the continuation of his career to a specialist in Cleveland, Ohio. He had been advised by doctors in the United Kingdom and Netherlands that he ought not to play on but the one in Cleveland was able to perform an operation to correct the damage and allow him to do so. 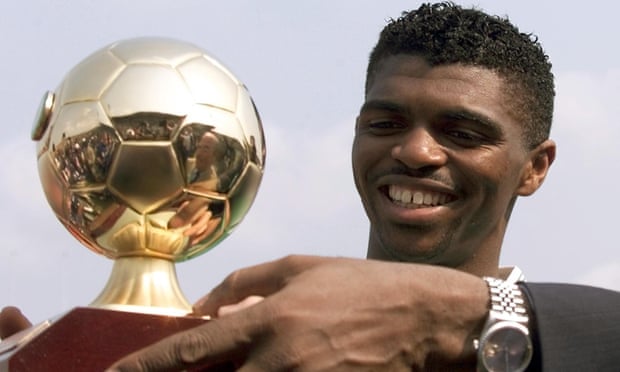 Nwankwo Kanu receives the African player of the year award for 1999. Photograph: Olivier Morin/EPA
Kanu had won three Eredivisie titles at Ajax, together with the Champions League, and he helped Nigeria to Olympic gold in the summer of 1996. He would win the Uefa Cup at Inter before his move to Arsenal, where he won two Premier Leagues and two FA Cups. He would win another FA Cup at Portsmouth in 2008, scoring the only goal in the final. Capped 86 times by Nigeria, he played for them at three World Cups and was twice named African player of the year.
“What I went through after my transfer to Inter made me stronger,” Kanu says. “There is no bigger test than when you are in between life and death so, if you can come up from there, you can handle anything. It gave me that push to go out and do whatever I had to do.
“It also changed how I saw the world. For example, if you haven’t been in a hospital, you don’t really understand what is going on in there. I realised there was more to life than only to be comfortable on your own. You can open up to help others. I know the pain that I went through as an adult, so imagine how it is for kids. It’s difficult for them to take that pain.”
Kanu needed a second operation in 2014 to re-repair the same valve and it left him feeling extremely weak. But it is impossible to keep him down for too long and he is more determined than ever to shine a light on the issues that relate to heart health, including those within professional football.
“We’ve had people like Marc Vivien-Foé die while playing,” Kanu says. “There have been too many others, including Cheick Tioté. The clubs and the federations have to be serious about giving check-ups to the players. What is to stop them doing them every three months? It is something I have been pushing and preaching because who knows, I might have been one of those who played football and died if my issue had not been found during my medical at Inter.”
Source: The Guardian
Top Stories