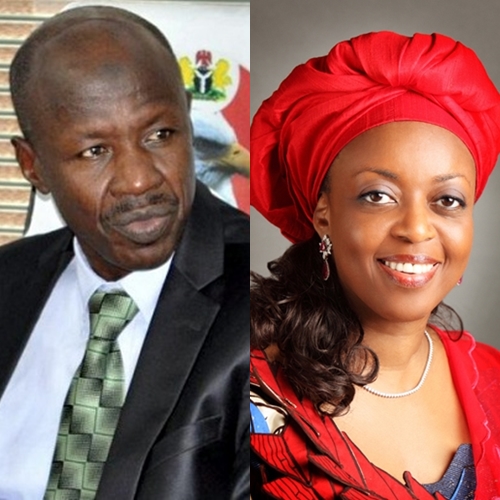 Magu and Diezani
The Acting Chairman of the Economic and Financial Crimes Commission (EFCC) Ibrahim Magu, has said that the commission needs less than 72 hours given by the court, in producing a former Minister of Petroleum Resources, Diezani Alison-Madueke, to face her corruption charges, stating that the only problem the commission has is that she is being held “in another man’s country”.
Mr Magu made this known on December 5, 2018, during an interactive session with journalists and social media influencers, at the commission’s headquarters in Jabi, Abuja.
Expressing optimism with complying with the court order, Mr Magu said: “We will comply with the court order. In fact, it is in our character to do so. If we won’t comply with the court order, that means we have reasons to appeal against the court decision.
"We need less than 72hours to produce Diezani. But she is being prosecuted by other law enforcement agencies outside this country. This is our predicament.”
Talking about the challenge in getting her, he said, “Another law enforcement agency is in the matter. You know she is in the United Kingdom. And we are making preparations to get her.
"We have already gone to the court, in fact that was our request for extradition that compelled the court to issue a warrant of arrest against her. I need just less than an hour. If she is here, I will get her immediately and take her before the court. Our problem is that she is another man’s country.”
Responding on the issue of not finding anything against the former minister, Mr Magu said, “Nobody can say she has not committed anything. All the neighbouring countries in Europe and America and all the law enforcement agencies in the world have knowledge of Diezani’s money laundering activities.”
Speaking on looted funds still hanging outside the country, Mr Magu wondered why it was difficult for the countries concerned to repatriate the looted funds.
He said: “More than 80 per cent of the loot recovery outside this country is still hanging. Ask them why is it hanging? Why is it so difficult to repatriate this money, when you have established that this only came from Nigeria and you know that this person does not own this money? There is no justification. It’s not small money. We have over $300million hanging in the United Kingdom”.
Responding on the Halliburton bribery controversy, the anti-graft czar, said “We are only looking at the way the money was expended, the manner in which it was shared, and used.
"There was money that was received from Halliburton. There was settlement. So now, our problem is how that money given to Nigeria was shared. We are very much on it. We will see to the end of it”.
He thereafter urged the general public to collaborate with the commission in the corruption fight, stating that the whistle-blower policy was still very much on.
“This whistle blowing policy is working. This boy that blew the Ikoyi whistle has become a millionaire and he is not calling me again,” he added.
(NAN)
Top Stories