Resident Electoral Commissioner in Niger State, Professor Sam Egwu, gave the warning in Minna on Tuesday after inspecting materials for next Saturday’s elections. 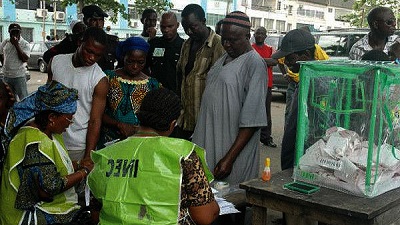 File Photo
Worried by the large-scale irregularities that characterised the just concluded presidential and National Assembly elections in Niger State, the Independent National Electoral Commission (INEC) in the state has warned that any community that refuses to allow the use of smart card readers during the next Saturday’s governorship and House of Assembly polls would have the results of the affected area cancelled.
INEC said the non use of the smart card readers contravenes the Electoral Act, insisting that the smart card readers were integral part of the electoral process and therefore mandatory for it to be used during the election.
Resident Electoral Commissioner in Niger State, Professor Sam Egwu, gave the warning in Minna on Tuesday after inspecting materials for next Saturday’s elections.
The INEC warning is sequel to complaints by local government returning officers for the presidential and National Assembly elections in the state, that the presiding officers were forced to drop card readers machines for manual voting in no fewer than 10 out of the 25 local government areas of the state.
According to Egwu, the commission discovered that in some parts of the state during the presidential and National Assembly elections, voters refused to use the smart card readers under the guise that the machines failed to function.
“I am aware we had challenges with the card readers in some areas; there was popular pressure to abandon the smart card readers; let me warn that failure to use the card readers the consequences will be very grave
“We will put zero for any polling unit where the card readers are not used,” Professor Egwu declared.
He also said that there was no link between the networks of the telecommunications service providers and smart card readers, insisting that card readers operate independently of telephone networks.
Professor Egwu disclosed that the commission was ready for the conduct of the governorship and House of Assembly elections, saying that it had received all the sensitive materials.
“All the sensitive materials are here in Niger State; we have scrutinised them, we have batched them local government by local government; we don’t have any shortage.”
He added that the materials would be sorted out polling unit by polling unit and despatched on Friday.
Professor Egwu said 31 political parties were fielding candidates for the governorship election in the state while 371 candidates from 27 political parties would jostle for the 27 assembly seats in the state.
The resident electoral commissioner was of the view that Saturdays election “will be more competitive, because all politics are local; elections on March 9 are local; people who did not vote the last time want to vote this time around.”
He, however, called on voters to conduct themselves in orderly manners during and after the election so that they would not run foul of the law.
Top Stories