Obasanjo Is The Number One Troublemaker In This Country - Oba Akiolu


The Lagos monarch who ascribed President Buhari's victory to God, accused Obasanjo of always arrogating power to himself. 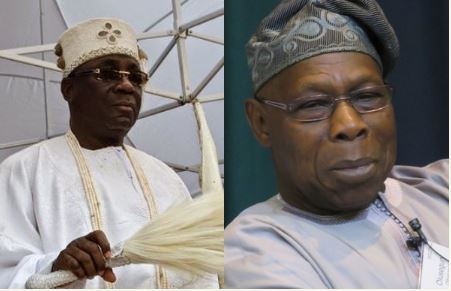 Oba Rilwan Akiolu and former President Olusegun Obasanjo
Oba Rilwan Akiolu who spoke on Wednesday when participants of the senior executive course (41) of the National Institute of Policy and Strategic Studies (NIPSS) visited him at his palace in Lagos, stated that former President Olusegun Obasanjo is the number one troublemaker in the country.
The Lagos monarch who ascribed President Buhari's victory to God, accused the former Nigerian President of always arrogating power to himself.
Stating that Obasanjo is the number one troublemaker in the country, Oba Akiolu said;
“I had said that Buhari would win even before the election, unfortunately, the number one person creating problems in this country is former president Obasanjo,” he said.
"He arrogated to himself the powers of the Almighty Allah by saying it was the support he gave to Buhari that made him win the first term."
"Obasanjo said Buhari would not win the second term, but did Buhari not win? Did I not say Obasanjo will be disappointed by the time the results were announced. The president’s victory clearly shows power belongs to God only and no man can decide who leads the country," he added.
Top Stories