The meeting which began at 11:03am after the arrival of the president was held inside the council chamber of State House Presidential Villa, Abuja. 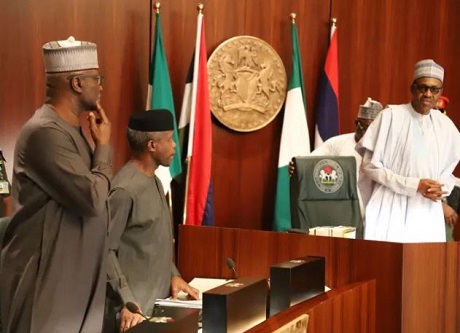 President Muhammadu Buhari is currently presiding over a valedictory meeting of the Federal Executive Council (FEC).

The meeting is holding inside the council chamber of State House Presidential Villa, Abuja.

The meeting began at 11. 03 am after the arrival of the president into the council chamber.

As is the usual practice, journalists were asked to excuse the meeting after opening prayers.

Mr Buhari is expected to dissolve the cabinet which he constituted in December 2015.

The president was re-elected in the 2019 election and would be sworn in for his second term on May 29.

In attendance at the meeting are Vice President Yemi Osinbajo, Secretary to the Government of the Federation Boss Mustapha, Chief of Staff to the President Abba Kyari, Head of Service of the Federations, Winifred Oyo-Ita, National Security Adviser Babagana Monguno and 31 ministers.

"They Only Want Selfies With Me"- Teenage Activist, Greta Thunberg Slams World Leaders