ASUP Chairman in the institution accused the management of the school of not paying attention to the welfare of the lecturers. 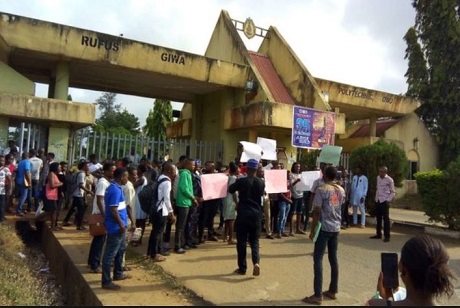 It was gathered that the demonstration by the lecturers paralysed social and academic activities on the campus of the institution as the examinations scheduled to start on Tuesday could not hold.

Addressing journalists, the ASUP Chairman in the institution, Mr Rafiu Ijawoye, accused the management of the school of not paying attention to the welfare of the lecturers.

Ijawoye alleged that the management had refused to pay the backlog of salaries of the ASUP members after allegedly receiving N1.7bn from the state government, adding that the promotion of the lecturers had been stalled since 2017.

He stated, “We decided to have a peaceful rally against the opposition and oppression of the school management against the welfare of our members. I am bringing to the attention of the public the precarious situation and the danger looming in the polytechnic community.

“It is unfortunate that the management is insensitive to the plight of the workers. We believe that the system must move forward. This is a collective struggle, because if our courses are disaccredited as a result of the non-payment of salaries, it will be a bad omen for the system.

“The governor has done his best in the last few months in bailing us out. Before the last accreditation, the management owed us about eight months’ salaries and the government released N1.7bn for the payment of the salary arrears and other emoluments.

“But it is unfortunate that the management, because of its selfish interest, is foot-dragging and withholding N500m out of this money, which could have reduced the salary arrears. What did they use the money that Mr Governor gave for?

“Aside that, the 2017 and 2018 promotion is still pending. We are not second-class citizens and it is unfair of the management to withhold our promotion; it is not a privilege but our right. It is on that note that we are expressing our grievances.”

The ASUP chairman called on Governor Rotimi Akeredolu to appoint a substantive rector for the institution, adding that that would save the system from collapse.

The management, in a statement by the acting Registrar of the institution, Mr Sule Atiku, asked the students to vacate the school premises.

According to the statement, the decision was taken in order to prevent the breakdown of law and order on the campus.

The management advised the students to vacate the campus latest by 3pm on Tuesday.
Top Stories

How A Nigerian Man, Two Others, Were Nabbed For "Charity" Fraud In India
Recent Stories