The defender is gradually recovering from a hamstring injury and will play no part when the Super Eagles face the National Elephants on Wednesday. 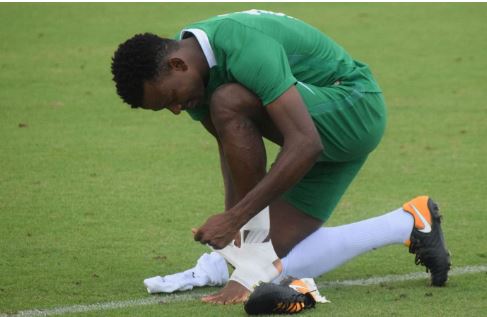 Shehu Abdullahi
Shehu Abdullahi could miss the remainder of Nigeria’s 2019 Africa Cup of Nations outing with a hamstring injury.
The Bursaspor defender was stretchered out in the first half, and was replaced by Chidozie Awaziem in the Super Eagles 1-0 triumph over Burundi.
Abdullahi had shrugged off an injury-plagued season with his Turkish topflight outfit to make Gernot Rohr’s squad to the biennial African football showpiece.
Although Nigeria medics did not place a timeframe on his full recovery, media officer Toyin Ibitoye told Goal that the right-back would be sidelined for Wednesday’s showdown with Guinea in Alexandria.
“Shehu is fine but may need just a few days to be back to 100%.”
While Rohr remained vague as to the extent of the injury, Goal understands the problem is not a severe one, but Nigeria will not risk exacerbating the injury with other options available for selection.
Therefore, the Super Eagles No.12 may not feature again for the three-time African kings in Egypt.
Since his international debut, Abdullahi who gave a positive injury update on Twitter has enjoyed a superb outing for the country – playing in the 2018 Fifa World Cup and boasting of 27 caps.
The injury setback will come to the Olympic bronze medalist, who has vowed to help Nigeria grab a fourth African title.
In his absence, the 2013 African champions will need to find someone to stop the attacking forays of opposing strikers.
Group B leaders, Nigeria face the National Elephants with victory handing them an early place in the Round of 16.
Top Stories