It would be recalled that the Nigerian Police Force had in December 2018 paraded five suspects linked to the murder. 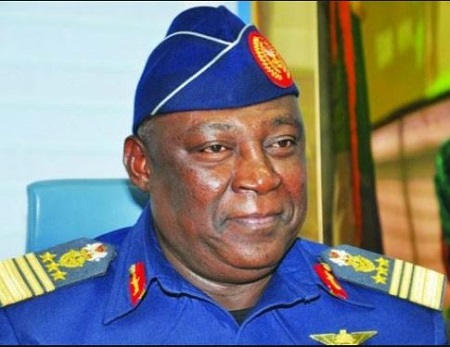 Detectives from the Defence Headquarters, (DHQ ) Abuja, and the Department of State Services (DSS) have arrested 14 suspects in connection with the murder of the former Chief of Defence Staff, Air Chief Marshal Alex Badeh.

Findings showed that the suspects were arrested by a Joint Investigative Panel which was inaugurated by the Chief of the Defence Staff, Gen Abayomi Olonisakin following the incident on December 18 last year.

The suspects were scheduled to be paraded before newsmen at the DHQ Garrison in Mogadishu Cantonment, Abuja on Tuesday. The parade was later postponed due to what officials of the DHQ described as “some unforeseen hitches.”

Before the postponement, five of the suspects were brought to the venue of the briefings at about 1.42pm and were later ushered into a separate room as military officers made frantic efforts with others for the remaining suspects.

It would be recalled that the Nigerian Police Force had in December 2018 paraded five suspects linked to the murder. One of them was a 25-year-old Shuaibu Rabo, who said the former CDS was killed while they were trying to rob him of money meant for the purchase of a new farmland.

A member of the ex-CDS family, however, debunked the claim saying there was no money with Badeh at the time he killed by the gunmen.

The initial parade of the five suspects did not, however, stop military and DSS to follow up the matter as the CDS Gen. Olonisakin order an investigative panel to dig deep into the murder.

The Nigerian Air Force Director of Public Relations and Information, Air Commodore Ibikunle Daramola, who first broke the news on Twitter, said Badeh died from “gunshot wounds sustained when his vehicle was attacked.”

The invitation on the parade of the suspects, signed by Lieutenant I.O Audu, partly reads, “I am directed to cordially invite you to cover the presentation of findings and parading of some arrested suspects by the Joint Investigative Panel set up by the DHQ on Tuesday. Members of the press are requested to be seated promptly as nobody will be allowed to enter the venue as soon as the event commences.”

The parade has, however, been postponed as the Acting Director of Defence Information Col. Onyema Nwachukwu pleaded with newsmen that a new date would be communicated as soon as possible.
Top Stories