A 10 years imprisonment sentence issued to soldiers by a court martial has been unanimously quashed by an Appeal court. 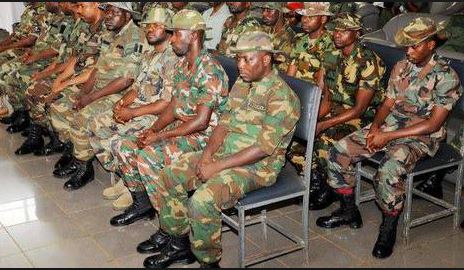 File photo
The Abuja Division of the Court of Appeal has quashed the conviction and sentences imposed on four soldiers.

A three-man panel of the Court of Appeal, led by Justice Abubakar Yahaya, unanimously quashed the conviction and sentences in a judgment delivered on May 14, 2019.

A certified true copy of the judgment was obtained by our correspondent on Wednesday.

The appellants – Lance Corporals Bankole Taiwo, Ayodele Olawale, Isaiah Olofu and Adebayo Gbenga – were convicted by the General Court Martial in Abuja on two counts of mutiny and conspiracy to commit mutiny.

They, along with other soldiers were arrested on September 14, 2013,  for going on a  rampage, shooting all night after sighting the decomposing bodies of their colleagues who were killed by Boko Haram insurgents in Kafila forest.

In the judgment of the GCM delivered on December 23, 2014, the appellants were convicted and sentenced to death on both counts.

The sentences were however commuted to 10 years’ imprisonment.

The appellants, through their lawyers, Mr Femi Falana (SAN), and Mr Samuel Ogala, subsequently filed a joint appeal on their behalf, contending, among others, that the judgment and record of proceedings of the GCM were a nullity not having been signed and dated immediately as mandatorily required by Rule 76(3) of the Rules of Procedure (Army) 1972.

The appellants also contended that the GCM had no jurisdiction to try and convict them.

They also contended that they were not afforded fair hearing by the GCM which they alleged “based its judgment and conclusions on extraneous evidence when the prosecution did not prove its case beyond reasonable doubt”.

In the lead judgment delivered by Justice Yahaya, the Court of Appeal resolved two of the issues raised against the appellants and in favour of the Nigerian Army, the respondent in the case.

The only issue resolved in favour of the appellants was the one about the failure of the GCM to immediately sign and date the proceedings and judgment.

“The failure to sign the judgment at the time of pronouncing the verdict is fundamental and has rendered the entire trial a nullity, as there must be a valid judgment after trial.

“For that reason, I set aside the trial as it is a nullity and discharge the appellants since they had earlier been tried and convicted.

“However, as a penultimate court, I resolved issues 2 and 3 in favour of the respondent and dismiss the appeal on that basis in case my resolution of issue 1 is found wanting by the Supreme Court.”

The appeal was filed against the judgment of the GCM at the Army Headquarters Garrison Conference Room, Asokoro, Abuja delivered on December 23, 2014.

The appellants were personnel of the 81 Batallion AFISMA, now 113 Batallion, based in Gubio Camp, Kafila, Borno State, under 7 Division, Maiduguri.

The batallion was said to have, on September 12, 2013, attacked a Boko Haram insurgents’ camp in Kafila Forest.

The attack was said to have failed and the battallion suffered many casualities, and the following day, a rescue team went to the forest to recover some corpses.

Corpses of an officer and and 28 soldiers were said to have been recovered.
Top Stories