A member of the federal legislature management confirmed the development to one of Punch correspondents on the condition of anonymity on Saturday. 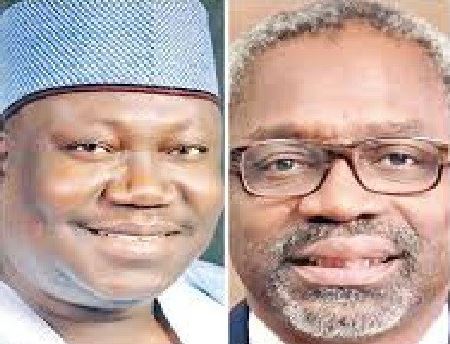 Senator Ahmed Lawan and Speaker of the House of Representatives, Mr Femi Gbajabiamila
President of the Senate, Senator Ahmed Lawan; his deputy, Senator Ovie Omo-Agege; Speaker of the House of Representatives, Mr Femi Gbajabiamila; Deputy Speaker, Mr Ahmed Idris, and 465 other lawmakers are set to receive at least N32.83bn  as welcome package, investigation has shown.
It was learnt that the lawmakers start receiving the money from Monday.
A member of the federal legislature management confirmed the development to one of Punch correspondents on the condition of anonymity on Saturday.
He said, “We have not started the disbursement of what you people called ‘welcome package’ but the honourable members and the senators should start receiving their money  from next (this) week because we have done our part.”
The management of the assembly could not comment on the issue on Saturday as the phone  calls made to  the Director of Information, Rawlings Agada, did not connect.
He had also yet to reply the text message sent to him as of the time of filing this report.
The welcome package comprises annual accommodation allowance, furniture allowance, and motor vehicle loan. It will also include the salaries and allowances of the lawmakers for the first month and the running or overhead cost for the first three months.
There was indication that the running cost might have been enhanced as each member of the House of Representatives might receive as much as N70m.
Although it could not be ascertained what a senator would receive, traditionally, senators are paid higher than the House of  Representatives members.  If a Rep receives N70m, a senator may receive up to N10m.
However, N32.83m is the summation of N70m into 469 places which is the total number of lawmakers at the federal level.
A source at the National Assembly confirmed to one of our correspondents that each Rep would receive N70m while another source confirmed that a senator would receive at least N70m.
The summation of the annual accommodation allowance, furniture allowance, and motor vehicle loan for either a senator or Rep is lower than N70m, thus indicating that the unofficial emoluments of the lawmakers may have been enhanced.
A senator collects N40.5m (for three months) for overhead as revealed by Senator Shehu Sani in the 8th National Assembly. The monthly salary and regular allowances of a senator is N1, 063,860.
As prescribed by the Revenue Mobilisation, Allocation and Fiscal Commission, a senator is entitled to N4,052,800 for accommodation (once a year) and a furniture allowance of N6,079,200 (once in four years). Should a senator desire, they are entitled to N8, 105,600 as motor vehicle loan.  These sum up to N59, 801,460.
A member of the House of Representatives, on the other hand, receives N30m a quarter for overhead or running cost. They are also entitled to a monthly salary and a regular allowance of N794, 086.83.
The accommodation allowance of a Rep is N3, 970,425 per annum while the furniture allowance is N5, 955,637 (for four years). Should a Rep desire, they can get a motor vehicle loan of N7, 940,850.50. These sum up to N48, 660,999.83.
The lawmakers are expected to rent apartments since the estate meant for them at the Apo legislative quarters has been sold.
A member of the Senate ad hoc committee on welfare, in a telephone interview with one of our correspondents on the issue wondered why the media had placed “too much emphasis” on the issue.
He said, “The media branded the allowances, ‘welcome package’ as if they are illegal,  whereas there is a law  backing it.”
He added,  “The law which established payment of allowances to newly appointed or elected public office holders is not new and it cuts across the three arms of government.”
Lawan and  Gbajabiamila had set up ad hoc committees in both chambers to work with the National Assembly management to ensure the lawmakers were ready to resume work on Tuesday.
Confirming the allowances and the scheduled payment, members of the parliament told one of our correspondents on the condition of anonymity that the payment was supposed to have been paid earlier than now.
A member of the House of Representatives said, “The allowances should be paid before resumption. As a new member, you are given furniture and accommodation allowances; these will total over N9m. They will give you the money and it is left for you to  get a house or  stay in a hotel, nobody will be housed anywhere.”
The source added, “We have not collected anything. Up till now, I have not got one naira. I’m broke now and I’m looking for money.”
A senator also said they had not been paid.
Another lawmaker said, “After payment of the furniture and accommodation allowances, car loans will come later, but we need to settle down first, that is why accommodation and furniture will be paid ahead of resumption.
“The car loan is about N7m. It’s different from the official car that will come later. The loan is just like an advance payment of our annual transport allowance.”
When asked if the loan was compulsory for all members, the lawmaker said because it would be interest-free, almost all of them would take it.
The source added, “The other car you are talking about, that is an official car and it is for committee work. That is what we are supposed to use for oversight functions. However, the car you buy with the loan is completely yours because you will pay for it.”
Former Chairman of the House Committee on Media and Public Affairs, Mr Abdulrazak Namdas, said,
“Regarding the offices, the management is in charge of that; it is the management that handles the issue of welfare, including accommodation.”
Lawan last week denied that lawmakers collect jumbo pay, putting his salary at N750 a month.
Top Stories