The South American governing body said all issues were fixed prior to the controversial game and that it had no impact on the match. 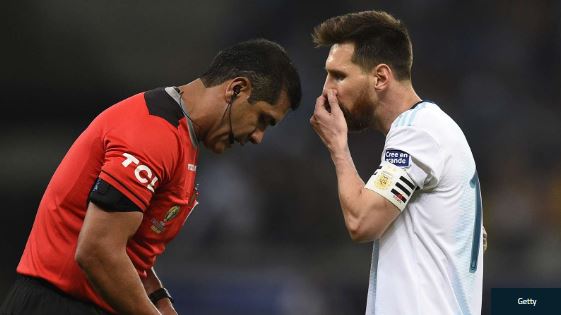 The referee and Leo Messi
Conmebol has confirmed problems with the VAR system used in Brazil's controversial Copa America semi-final win over Argentina, with reports that Brazil president Jair Bolsonaro's security team were to blame for communication issues.
The South American continental governing body has insisted that the problems were fixed before kick-off in Belo Horizonte on Tuesday night amid Argentina's football association (AFA) decrying "serious and gross refereeing errors" that led to their exit.
The Albiceleste were incensed by a decision not to refer a penalty shout for a foul by Dani Alves on Sergio Aguero to VAR. Roberto Firmino scored Brazil's second goal on the subsequent counter-attack after the incident.
The VAR communication problems were reportedly a result of the visit of Brazil president Bolsonaro, whom the AFA said is using the tournament as a "clear political demonstration" in a six-page letter to Conmebol.
Bolsonaro was at the stadium to watch the game and his security team's radio frequencies coincided with those that the referee used to communicate with the VAR team, according to  Globo Esporte .
With the problems fixed before the game the responsibility for the non-review of the penalty decision still rests with referee Roddy Zambrano and Leodan Gonzalez, who led the video review team.
The AFA  had its say on the events earlier on Wednesday , and echoed the unhappiness of Aguero and Lionel Messi, tweeting: "We saw the same thing as you."
Messi had decried the officiating, calling it "bullsh*t" , and even suggested there was bias in favour of Brazil.
The Barcelona star also called on South American authorities to "analyse" the use of the video assistant referee to avoid a repeat of the incident.
Aguero described the decision not to refer the penalty as "incredible ", despite saying that VAR had worked well in the tournament overall, until the non-call.
Argentina were denied a chance to make it to their third consecutive Copa America final by the defeat.
Brazil, meanwhile, have a chance to win their first Copa trophy since 2007, on home soil against surprise finalists Peru in the final at the Maracana on Sunday July 7.
Top Stories