Things You May Not Know About Osun Election Dispute


Following Supreme Court's decision in favour of Oyetola today, here are important details that led to the decision. 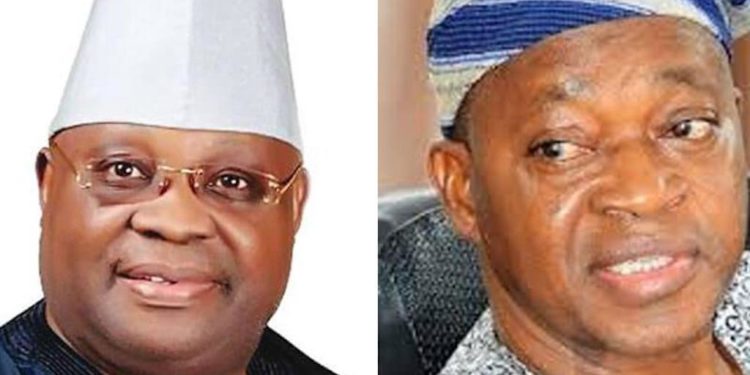 Adeleke and Oyetola
There were 48 governorship candidates, 1,246,915 PVCs distributed, 3010 polling units, 332 registration areas, 30 local governments, 4,700 card readers and over 40 local and international observers in the election.
The major candidates in the race were Gboyega Oyetola (APC),Iyiola Omisore (SDP), Fatai Akinbade (ADC), Ademola Adeleke (PDP) and Moshood Adeoti of the (ADP).
After compilation and counting, Joseph Afuwape, INEC’s Returning Officer, announced the results on Saturday, September 22, 2018. He said Adeleke, candidate of the Peoples Democratic Party (PDP), polled 254,699, while his closest challenger, Isiaka Oyetola of the All Progressives Congress (APC), had 254,345 votes. 3,498 votes were cancelled.
The election was declared inconclusive
Afuwape said that since the difference between the two leading parties was just 353 votes but the number of cancelled votes was 3,498, no winner emerged.
There was a rerun
The Independent National Electoral Commission however fixed September 27th for a rerun governorship election in the state due to irregularities which marred the election at some polling units in Ife North, Ife South and Orolu local government areas, including cases of card reader malfunctioning, ballot box snatching, among others.
The rerun election was held in seven polling units across four council areas.
INEC declared Oyetola winner
After the rerun election in the state, INEC declared the candidate of the All Progressives Congress, Gboyega Oyetola, as the Governor-elect of Osun State.
The returning officer, Prof. Joseph Fuwape, declared that the APC candidate, Oyetola, won the governorship election by scoring a total number of 255,505 votes while Adeleke of the PDP polled 255,023 votes.
This was, however, met with protests by Adeleke, the PDP, and the Coalition of United Political Parties, among others.
Adeleke filed petition and asked tribunal to declare him Osun governor
Ademola Adeleke, filed a petition at the Election Petition Tribunal sitting in Osogbo to challenge the victory of Gboyega Oyetola.
The petitioner and his party, the PDP, prayed the tribunal headed by Justice T.A. Igoche, to nullify the victory of Oyetola and declare him winner of the poll.
Tribunal declared Adeleke winner of Osun governorship election
The Election Petitions Tribunal in Osun State declared Ademola Adeleke winner of the election.
The three-member panel said that the rerun election that held on September 27, 2018, was illegal.
The tribunal, however, deducted the votes scored by the APC candidate Gboyega Oyetola at the rerun after declaring it illegal.
Oyetola heads to Appeal Court
The Court of Appeal set aside the majority judgment of the election tribunal which had allowed Adeleke’s petition and declared him winner of the election.
By agreement of lawyers in the appeals, the court on June 17, 2019 took arguments from Onyechi Ikpeazu (SAN),  for the appellant, and Wole Olanipekun (SAN), for the 1st respondent (Oyetola), in respect of appeal marked: SC/553/2019.
The court said its judgment in the main appeal – SC/553/2019 – will be applied to two other similar one, filed by Adeleke against the Court of Appeal’s decision in relation to the appeals filed by the Independent National Electoral Commission (INEC) and the APC,marked: SC/554/2019 and SC/555/2019.
The court also took arguments from Ikpeazu (for the appellant), Yusuf Ali (SAN) for INEC; Bode Olanipekun (SAN) for Oyetola and Olumide Olujinmi, for APC in relation to the fourth appeal, marked: SC/556/2019.
In their arguments, lawyers to the respondents – INEC, Oyetola and the APC faulted the appeals and prayed the court to dismiss them for lacking in merit.
Supreme Court affirms Oyetola winner of Osun guber election
The Supreme Court on Friday announced Oyetola winner of the Osun governorship election.
The court dismissed the appeal by candidate of the Peoples Democratic Party (PDP) in the election, Senator Ademola Adeleke.
The Supreme Court, in a majority decision of five-to-two, read by Justice Olabode Rodes-Vivour, held that the failure of a member of the election tribunal, Justice Peter Obiora to sit on February 6, 2019 rendered the entire proceedings and the judgment given by the tribunal a nullity.
Source: TheNation
Top Stories