Man Arrested After Robbing A Mosque In Niger State (Photo)


A man who broke into a mosque to rob has been arrested by security operatives in Niger. 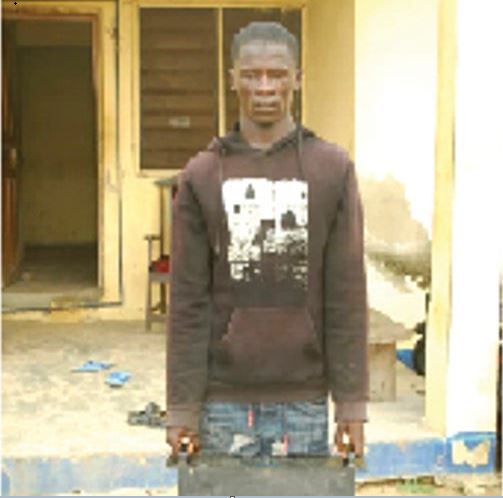 The suspect after his arrest
A suspected armed robber identified as Usman Adamu, has been arrested by the Niger state police command for  breaking into the Kwarkwata Mosque in Bosso Local Government Area of the state.
The 34-year-old resident of Fadikpe area of Minna metropolis stole an amplifier from the mosque after the break-in. The suspect whose arrest came after a tip-off, has been on the police wanted list after being linked to various armed robbery attack in the area.
Adamu who confessed to the crime, disclosed that he has been involved in armed robberies over a two-year period.
“I usually steal people’s belongings at the slightest opportunity. I break into people’s houses, especially when they have gone to work and sometimes when they are asleep. I have the tools to open any door I want,” he stated.
Asked why he stole an amplifier from the mosque, Adamu said, “I stole it because I wanted to sell it and make money for my upkeep.”

Niger State's Police Public Relations Officer, Muhammad Abubakar confirmed that the amplifier the suspect stole has been recovered. He also told newsmen that the suspect will be charged to court after the investigation has been concluded.
Top Stories