She further revealed that she received a text message from her husband prior to his arrest and detention in a solitary confinement. 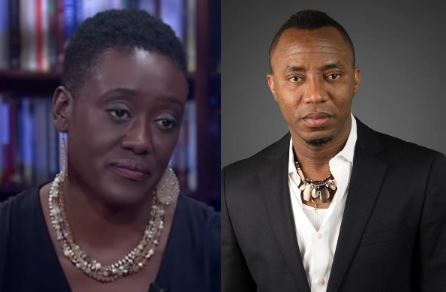 Opeyemi Sowore and Omoyele Sowore
Omoyele Sowore's wife, Opeyemi has decried the continous detention of her husband by the operatives of the Department of State Services (DSS) after his arrest.
Recall that the DSS secured a court order to detain the former Presidential candidate of the African Action Congress (AAC) for 45 days after accusing him of receiving millions of dollars from foreign collaborators to topple President Buhari's government. He was also accused of being in contact with Nnamdi Kanu, leader of the Indigenous People of Biafra (IPOB) to mobilize forces and holding series of meetings with foreign collaborators outside Nigeria including Dubai to violently overthrow the government of President Muhammadu Buhari.
However speaking on Democracy Now which is a news programme in the United States, Opeyemi said her husband is being investigated for treason and there are no formal charges against him.
She further revealed that she received a text message from her husband prior to his arrest and detention in a solitary confinement. Opeyemi added that she and her children have only spoken to him just twice since his arrest.
She said,
“There are no formal charges per say, he is just being investigated for possible treason and terrorism.
“They based it upon a meeting that he had with Nnamdi Kanu, who has an organisation about Biafra.
“The two of them met and Yele (Sowore) made it public. In fact, he disagrees with some of Nnamdi Kanu’s rhetoric.
“Yele’s own thing was to bring in everybody’s voices so that Nigeria can be a country for pretty much all of its citizen.
“They also mentioned that he may have taken money from international countries and that he met some of them in Dubai but he has never been to Dubai before. No money basically has been found with him.
“So, those are the things that they’ve mentioned and associated with him but they basically have no ground for holding him and haven’t found any evidence.
Top Stories