Why Doctors Are Leaving Nigeria - MDCAN


In Lagos, about 60 doctors leave the services of Lagos State every month, aside those working in private hospitals. 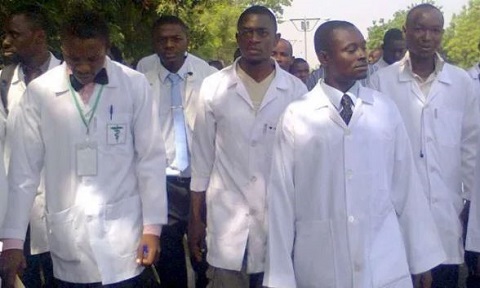 The Medical and Dental Consultants Association of Nigeria of the University College Hospital, Ibadan, on Monday described as worrisome the rate their colleagues left the country.

The Chairman of MDCAN, Dr Dare Olulana, spoke after its yearly ward round charity where 10 patients between ages two and 45 years were given N400, 000 to settle their medical bills.

Olulana, while responding to questions from journalists, said his association was also affected by the exodus.

He said, “It is very disheartening because when some of us were in training, it was not really a problem, patients didn’t pay out of pocket. They were taken care of and they could run into thousands.

“But these days, you go back home unfulfilled; unhappy with your job, and sometimes you get depressed because you lose your patients who couldn’t afford the cost of care.

“As a result of this, many doctors are leaving the country because you just don’t feel happy seeing your patients die. You want to work in a place and country where the value of your training can be well utilised and appreciated.”

He added, “It happens every day; doctors are leaving the country for greener pastures. In the past two days, I have seen colleagues who called that they were now well settled in the UK and these are consultants.

“In Lagos, about 60 doctors leave the services of Lagos State every month, aside those working in private hospitals.

“We don’t have the statistics for Ibadan yet but I can tell you a lot are on their way out, as some are also filling forms, waiting for the opportunity to get out of the system.”

On the group’s charity, he said the management wrote off medical bills of many in support of the MDCAN efforts at assisting the patients as a way of giving back to the society to make these patients happy.
Top Stories