It Runs In The Family: Check Out The Celebrity Siblings Doing It Big In Nigerian Showbiz


There are several celebrity sibling who have done big things in the Nigerian showbiz scene. These are some of those siblings. 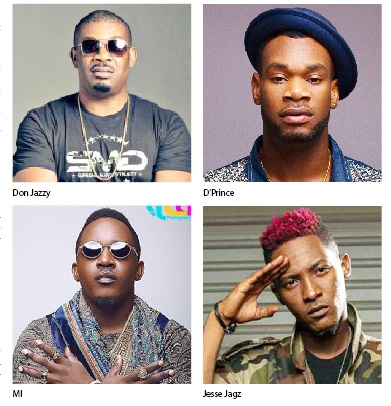 For many years, the Nigerian entertainment industry has endeared itself as the face of African entertainment, churning out topnotch personalities in movies, music, fashion and comedy. In this report, ANTHONY ADA ABRAHAM and CHRISTIANA NWAOGU picture some celebrity siblings grinding and making the industry thick.

The Okoyes deserve an award for the impact they have made in Nigerian music since making their debut in the industry. The brothers – Jude, Paul and Peter – have been doing music: writing, singing and producing, under their label, Square Records, for over a decade now, winning several awards in the country, the continent and the world.

The twin brothers, Peter and Paul, who are known as PSquare, are the artistes, while their elder brother, Jude, serves as their manager. They have many major hits to their credit and even after splitting, they continue to thrill their fans with good songs in their solo careers as Rude Boy and Mr P.

Kunle acts, produces and directs good movies while Gabriel and Aremu, who could be mistaken for Kunle’s twin, are great actors. At some point in his career though, Gabriel also launched his music career as ‘G Fresh’ and produced songs such as ‘Kokoro Ife’ and ‘Awelewa.’

The Otedola girls, DJ Cuppy and Temi are steadily collaborating on projects and spreading each other’s message to a wide fanbase; one as a sound mixer and the other as a fashion blogger.

Anyone who knows these brothers know that they would readily win an award for the ‘Most Fit Siblings’ in the industry, why? Because; while Ikechukwu is a talented actor and musician, his brother Uzi is a personal trainer who does music on the side.

Don Jazzy and his younger brother, D’Prince are both musicians who have made good music right from the days of Mo’Hits down to the current Mavin regime.

Remi Adetiba is a renowned photographer whose work speaks for him while his sister, Kemi, is a movie maker and director who has worked on movies including ‘Wedding Party,’ one of the films that showed at the Toronto International Film Festival 2016, and ‘King of Boys,’ which was recently considered as one of the entries for the Oscars in the International Movies entry category.

The Amatas are possibly one of, if not the only quintessential celebrity family where each member has a distinctively unique famous attribute that sets them apart individually and puts the family at the top of history. With a combined net worth of success in film production, acting and directing, the Amata’s success spreads across various areas of the entertainment industry, including film, television.

The eldest of the brothers, Zack, took a bit of a break in the early 2000s after enjoying a brilliant career from the 80s through the 90s after his son, Jeta Amata came of age to shine. Jeta redefined the clan’s film making abilities and successes taking it to higher grounds all the way to the international community with stories inherent in the African culture.

After a very long and successful career in Nigeria’s movie industry, veteran actor, Pete Edochie passed his legacy on to his boys, Linc and Yul.

The truth about these siblings is that; while Linc, was first to join his father in the industry and has since exited the scene, Yul, who came later on is still going strong.

Yul, who came to prominence mid-2000 has remained one of the most sought-after actors in the ever-growing industry. Apart from being successful celebrities, the brothers have a striking resemblance and voices that can match for an OAP.

Eniola Adedeji popularly known as DJ EniMoney is the younger brother of YBNL boss, Olamide Adedeji. Enimoney is a DJ who is a beast when he spins.

Who doesn’t love the Choc Boys from Jos, MI and Jesse Jagz? These brothers give us steady sibling goals as musicians working in their different capacities to raise their record label, Chocolate City to where it stands currently.

The most popular of this bunch who has been around for the better part of Nollywood, is Empress, the only female in the clan.

Starting off as teenagers in the movie industry, in the 90s, these siblings individually found their way to the top. John, the eldest of the clan was the first to grab fame after securing a role in one of late Amaka Igwe’s popular soaps. Though it was minor, it boosted his career and with the advent of home videos, the success of John and Empress knew no bounds.

The third in the family and the youngest, Aquilla took from where his clan had reached and got himself a vantage position behind the scene directing some of the most interesting thrillers from Nollywood in the mid-90s till early 2000s.

Queen of the radio, Tosyn Bucknor and top wedding designer, Funke Bucknor-Obruthe are sisters. They steadily serve inspiration as they are queens in their respective industries.

Najite and Michelle, daughters of former Nigerian envoy to Ethiopia are entertainers and we are glad. The pair work in the same field; Najite as an actress and a director and her sister, Michelle, as a talk show host as well as an actress.

Ayo Makun, aka AY, and Yomi Casual are brothers who are complimenting each other in their different businesses in the entertainment industry. When AY isn’t decking Yomi’s designs on the red carpet, he’s throwing a fat cheque his way. Yomi, on the other hand, is a fashion designer has done well clothing the most popular Nigerian celebrities.

Segun and Tunde Demuren are brothers and best buds! They’re also the guys who are in charge of Empire Mates Entertainment (EME), the record label that propelled Wizkid to where he is right now.

You know you love beautiful sisters, Uche Pedro and Ink Eze right? Uche is the owner of the popular website, BellaNaija and her sister, Ink is the Editor for the Wedding sections of the website. Major goals!

If you listened to the Beat FM way back in 2015, the name Fade Ogunro is the voice you hear on the Liquid Lounge. She, however, quit to join her brother, Sesan who is a popular music director.

Dakore and Timini are sibling goals! Always at the forefront of each other’s successes being a fanboy or fangirl and it’s always cute to look at honestly.

In our head, E-Money is our best friend and you obviously know why. But Kcee and E-Money have helped each other and set themselves up ahead for the future.

Last but not the least on our radar is former GOOD Music artist, D’banj and his brother, Kay Switch. Remember when D’banj hopped on his hit song which is a wedding jam any day. Two people can make it from a family!

Sound Sultan and Baba Dee are both musicians and have ventured into acting with the ‘Head Gone’ movie.

Chidinma and Chidiebere Aneke are famous Nollywood identical twin actresses, producers, models, entrepreneurs and television personalities. They are popularly known as the Aneke twins. They both joined the Nigerian movie industry in 1999 and acted in their first movie ‘Ebuka,’ a movie that gave them an advantage in Nollywood.

In 2004, the sisters rose to fame after starring in the Nollywood blockbuster movie ‘Desperate Twins,’ a movie that brought them to limelight and earned them a nomination for Most Promising Acts to Watch at the Africa Magic Viewers Choice Awards.