Obono-Obla Under Fire For Accusing Osinbajo Of Witch-hunt


Following his suspension, the SPIP chairman had accused the Vice President and some other highly placed individuals of persecuting him. 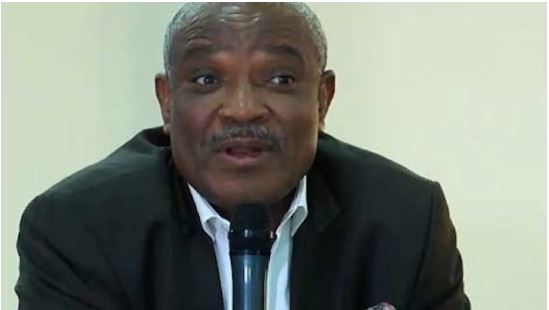 The Initiative to Save Democracy, ISD, has declared that the Vice President, Yemi Osinbajo has no hand in the current travail of Okoi Obono-Obla, embattled former Chairman of the Special Presidential Investigation Panel for the Recovery of Public Property, SPIP.

ISD insisted that Obono-Obla was responsible for his current travails.

DAILY POST recalls that President Muhammadu Buhari had in August suspended Obono-Obla who was also his Special Assistant on Prosecution after the ICPC indicted him for certificate forgery and other corruption-related allegations.

Following his suspension, the SPIP chairman had accused the Vice President and some other highly placed individuals of persecuting him.

Writing on his Facebook page, Obono-Obla had claimed that even those who stole billions and contributed to wrecking the economy, did not receive such treatment.

However, the ISD, in a statement issued by its Press Secretary Peter Oladele stated that it was dishonourable for public servants to make senseless allegations of witch hunt whenever serious allegations were made against them while failing to answer the substantial issues that were being brought forward.

The statement reads: “Vice President Yemi Osinbajo has nothing to do with the travails of the sacked Chairman of the Special Presidential Investigation Panel for the Recovery of Public Property (SPIP), Mr. Okoi Obono-Obla, and it is unfortunate that the former Chairman has chosen to drag his name into the affliction he has brought on himself by his own hands.

“Okoi Obono-Obla has serious allegations facing him, from bribery to extortion, to the forgery of certificates; these are not matters that he expects Nigerians to wish away. Is it not shameful that upon the raising of these serious allegations, Mr Obla has blamed everyone else for his travails but himself? And then goes ambitiously for the Vice President, accusing him of being the architect of his fortune. This is puerile.

“Obono-Obla has been accused of blackmailing those he was asked to investigate by threatening and extorting them. He was also accused of using the panel as a vendetta against his so-called enemies. These are serious allegations that speak to the breach of public trust by a public official. They are to be answered in fact and not by chasing shadows and imaginary enemies.

“There are also allegations that he had gone ultra vires. Obono-Obla acted in areas that were not within his mandate. He broke the rules of his engagement in the most blatant and offensive ways. The former Chairman had assumed prosecutorial powers that were not conferred on him by any laws or any official declaration. He had began to assume the role of the EFCC and ICPC and began taking matters to court, meanwhile his task was strictly an investigative one. Even when he was called to order by the Vice President, cautioning him that he was exceeding his bounds, he still went ahead to continue in breach of the caution.

“Piles of petitions were received against the excesses of the former Chairman accusing him of unprofessional conduct and seeking for bribes. He was in fact accused of going to mark a person’s house in preparation for seizure and reallocation because the person had failed to give a bribe of Twenty Million Naira. And this is one out of several. This is nothing short of dishonour and abuse of power and office.”

“Now he blatantly accuses the Vice President of being the orchestrator of his perils? This is nonsensical to say the least.”

“Mr Obla should take the high road, come out of hiding and face the dividends of his misconduct in office.”

The group stated that public officials must learn to act responsibly while in public office as they would be made to account for their deeds once they are out.