It was learnt that on September 12, two armed robbers attacked him while in traffic and shot him in the face. 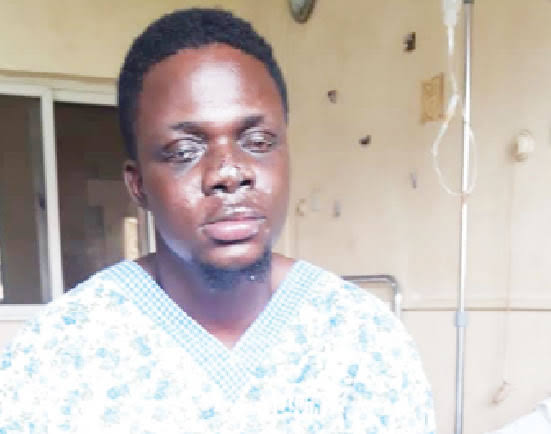 A graduate of Physics from the Kogi State University, Tomi Waziri, 27, has lost his eyesight to an armed robbery attack while in traffic in the Apongbon area of Lagos.
According to Punch, Waziri, who was waiting for his call up letter from the National Youth Service Corps for the mandatory one year service, was said to have approached his sister’s husband to engage him as a Taxify ride hailing service driver until he would be mobilised for the scheme.
It was learnt that on September 12, two armed robbers attacked him while in traffic and shot him in the face.
Waziri was said to be conveying a female passenger to the Papa Ajao area of Mushin around 8.00 p.m., when the robbers attacked him.
They were said to have left immediately they shot him.
The victim narrated his experience, “I live at No. 35 Daudu Street, Mafoluku, Oshodi. I was robbed in traffic on the Apongbon Bridge, Lagos, on September 12, 2019, by two young men around 8pm. I was a Taxify (now Bolt) driver and I had a female passenger in the car. We were going to Papa Ajao, Mushin.
“One of the robbers pointed a gun at me; I was about giving him my phone, when he shot me in the face and collected the phone. The pellets shattered the window and hit me in my two eyes.
“The robbers ran away immediately I was shot. My passenger became scared and panicky. The next thing I noticed was that she disembarked from the vehicle and began calling for help as she was running away.
“I was bleeding profusely without help. I came down from the vehicle and shouted for help; nobody answered. After about five minutes, two policemen showed up.
“They were the ones who took me to the Military Hospital, Yaba, in my vehicle. One of the policemen drove us to the hospital. While driving, the other was busy holding me and saying kind words to me so that I wouldn’t give up.
“When we got there, I was given first aid to stabilise my condition.
“I lost vision immediately I was shot. After treatment, it is still the same, we are only hoping for God’s intervention. The vehicle belongs to my sister’s husband. I used to remit money to him pending when I would get the NYSC call-up letter.”
According to him, his brother-in-law has been supportive, and is always around for him.
Waziri noted that the doctors at the Eye Foundation, Isaac John Street, Ikeja GRA, told him that if he had been treated earlier, he would have regained sight in his right eye.
He added, “I went for surgery at the Eye Foundation. Before then, I was being treated at the Lagos State University Teaching Hospital, Ikeja, and I was about to do the surgery at LASUTH, but there were delays there.
“It was through God’s help that we were able to do it at the Eye Foundation. And when we got there, we were told that if we had come for the surgery earlier, I would have been seeing with at least my right eye. LASUTH was just negligent and wasting time.
“What the doctors are saying now is that we can only hope for the best; what I know is that there is no vision now.”
Waziri noted that his nose was treated at LASUTH, adding that there were still pellets in his face and two teeth, as there were pellets logged in the gum.
He said the doctors told him that if he wanted to get permanent treatment for his damaged teeth, he would have to pay N350,000 for each.
Concerning the pellets in his face, he said the doctors advised him that any attempt to remove them would result in more damage, adding that his body would expel them naturally.
Top Stories