Meet Aminu Salihu, The Hawker Who Defies Elephantiasis To Work In Bauchi (Photo)


The story has been told of a hawker in Bauchi state who goes about his business while defying the scourge of elephantiasis. 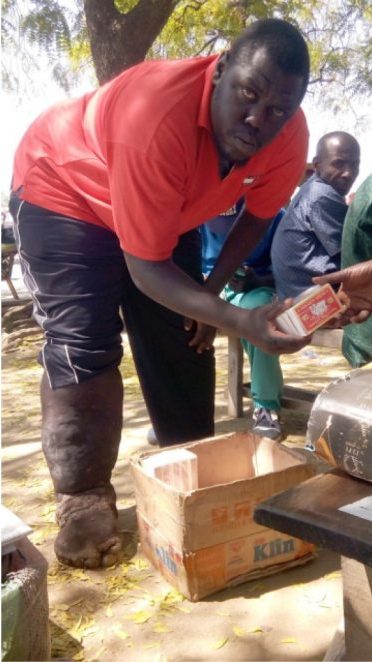 Thirty-year-old Aminu Salihu Muhammad is a popularly hawker on the streets of Bauchi metropolis. He hawks matches as his main business.

Muhammad a huge, jovial sports enthusiast is also known as ‘Aminu Mai Ashana’ by many of his customers, friends as well as wishers. Everyday he moves  around into the nooks and crannies of the city with his matches and exchanging banters with his customers and other residents.

He claims that he makes an average of N2000 daily from the business.

But what worries Aminu most now is the state of his health. He suffers from elephantitis, which seriously affects his movement and threatens his ability to seek for his livelihood.

“I have been battling with this ailment for over three years now. It started with a small puss which looked like a mosquito bite. I thought it was just a normal puss but later the area swelled up. I went to the hospital at the beginning of the problem and the doctor prescribed drugs for the treatment but I was unable to afford it,” he told North East Trust.

Muhammad explained that the cost of the prescription was N35,000 but because he did not have the money to buy the drugs his situation continued to worsen.

“My leg continued to swell to this level which sometimes I don’t sleep due to the pains. I don’t have the money to buy the drugs. I only buy some pain killers to relieve the severe pains.

“I hawk matches and the entire capital of my business is not up to N5000. In a day, I make between N1000 to N2000 out of which I get what to feed myself and buy some pain killers.

Muhammad said despite his many friends and customers he was yet to get anyone who will help him to treat the leg.

“I am appealing to spirited individuals, groups and governments to come to my aid and support me with the treatment of my leg. I have made several efforts to seek for financial assistance for the treatment but I was not successful and I continue to pray Allah to touch the heart of one person or group of persons to help with the treatment of these illness before it consumes my life.”

He said he has been in the business of hawking matches for six years now.

“This is my source of livelihood and I will continue to do my business but this disease is gradually trying to ruin my life because day after day the weight of my leg is increasing and affecting my movement, my business and my life.”