The police in Ogun State have arrested a 42-year-old woman Temitope Akinola for poisoning her granddaughter. 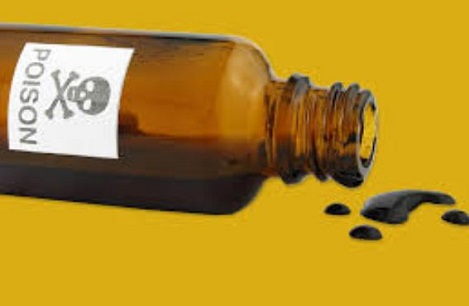 Hate – filled woman; Temitope Akinola, residing at Isote area of Sagamu, Ogun State, has allegedly poisoned her two days old granddaughter to death with the banned sniper, after previous plans to end the baby’s life while still in the womb was thwarted.

Temitope, 42, shocked both neighbours and the Police with the reason for her action, disclosing that she poisoned the grandchild to death in order to abort the marriage plans between her daughter and the father of the baby.

The grandma who disclosed this to the Police during interrogation told detectives further that she actually wanted the pregnancy terminated on discovering that her daughter was pregnant but backed off because her pastor advised against it.

She added that she doesn’t want her daughter to marry the father of the poisoned baby and thus, resolved to wait until the baby was delivered before carrying out the deadly plot on the deceased.

It was learnt that while the mother of the baby went to the bathroom to have her bath, she left the two day old baby girl in the care of grandmother but upon emerging from the bathroom, she saw the lifeless body of the baby after being poisoned with sniper.

The Ogun State Command Police Public Relations Officer, Abimbola Oyeyemi, who confirmed the arrest of the woman in a release on Sunday, stated that the suspect had admitted poisoning the “baby with a deadly insecticide known as sniper.”

Abimbola; a Deputy Superintendent of Police(DSP) added that the corpse of the baby has been deposited at the morgue of the Olabisi Onabanjo University Teaching Hospital(OOUTH), Sagamu, for autopsy, while the suspect has been transferred to homicide section of the state criminal investigation and intelligence department for further investigation and prosecution.

“The suspect was arrested following an information received by police in Sagamu division after the reported death of the child that the suspect, who has never hidden her hatred for her son in – law and who happened to be the father of the baby was the only person with the child while the baby’s mother went to take her birth, only for her to come back and met the lifeless body of the baby.

“The Divisional Police Officer, Sagamu Division, Okiki Agunbiade, a Superintendent of Police detailed detectives to the scene where the killer grandmother was promptly arrested,” Abimbola stated.