A cemetery worker has confessed that he sells human skulls for about N6,000 in Lagos state. 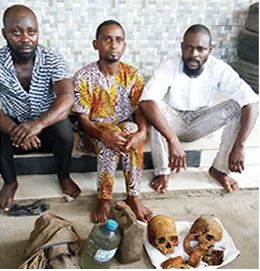 According to a report  by NewTelegraph, a 30-year-old cemetery worker, Kazeem Olarenwaju, has confessed that he sells human skulls for N6000 each.

Olarenwaju and his cronies, Muritala Salami, (43) and Amidu Kazeem (32), were arrested at the Oke-Sunnah, area of Lagos Island by policemen from Adeniji Adele Police Station.

Recovered from the suspects were water used in bathing corpses and clothes used in shrouding corpses before they were buried.

Salami and Kazeem, herb sellers, confessed that they use human skulls to prepare ritual, which make businesses to boom, yielding incredible profits.

According to Salami, he learnt how to prepare the charms from his late father, who was an herbalist.

He explained that after the death of his grandmother; her body was taken to Oke-Sunnah Cemetery for burial, where he saw several skulls jutting out of their graves.

Salami said: “It was when I saw the skulls that the plan of doing the ritual re-echoed in my mind. After we had buried my grandmother, I returned to the cemetery to meet Olarenwaju to help me get a skull. He said he couldn’t for fear of being arrested by the police. I promised to give him N6, 000 for each skull. It was then he accepted and asked me to come to the cemetery myself to take the skulls. When I got to the cemetery, I was able to collect two heads, which I gave to Olarenwaju. I asked him to bring them at night to Idumota Market. Immediately he brought them, I paid him and that was the last time we saw. Recently, I called him on telephone, that I needed another two skulls. He promised to get them for me. He said that I should add money to his normal fee. I accepted to add something. We agreed on a delivery day.”

Salami explained that the two skulls, which he wanted to buy was for Kazeem. He and Kazeem decided to go and collect the skulls from Olarenwaju. They didn’t know Olarenwaju had already been arrested. When they got to his place, police swooped on them.

Salami said: “It was poverty that pushed me into it. When I was growing up, I saw my father doing something of such nature.  When my herb business was not successful, I went to check his book, where he wrote all his charms and then I learnt them. After preparing the first two skulls with all necessary items, I made a lot of money from my business. That was why I returned to get another two skulls, but police arrested us.”

According to Olarenwaju, he had been working in that cemetery for two years.

He said: “Salami came to the cemetery, asking that I should get him biscuit. I didn’t know what he meant. He later said that it was human skulls. After much negotiation, we agreed on N6, 000 for each skulls. I then got two for him and I was paid N12, 000.”

He later called me on the telephone on Friday last week to get another two skulls for him; I told him it wouldn’t be possible, because people used to come to cemetery on weekends. I promised to deliver it on Monday. I was going to deliver it to him and his friends when police arrested me.”