Tacha’s manager also promised that a new date would be fixed as soon as the issue is sorted out. 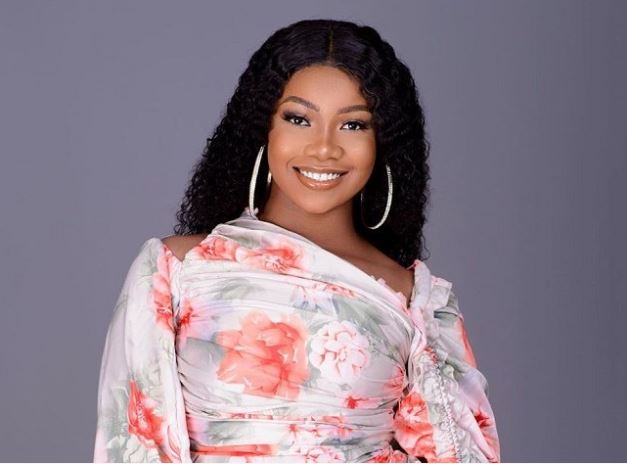 Tacha, former Big Brother Naija housemate, has canceled her planned trip to South Africa over what she described as “unforeseen visa issues.”

Tunji Ibrahim Balogun, her manager better known as Tee Billz, made the announcement on Monday. He also apologized to the reality TV star’s South African fans via Twitter.

Tacha’s manager also promised that a new date would be fixed as soon as the issue is sorted out.

“Dearest Titans, This is to duly address the South African Titans. Due to unforeseen visa issues, Tacha won’t be able to make it down to South Africa this Thursday. I’m aware that a lot of plans have been put in place for this engagement,” he said.

“But I would like to apologize and assure that immediately this is sorted out, we would revise the dates and publish a new schedule for this. There is no need for panic as plans are in place to ensure this is sorted as soon as possible. SA. The Queen cannot wait to be in your country to meet you all.” 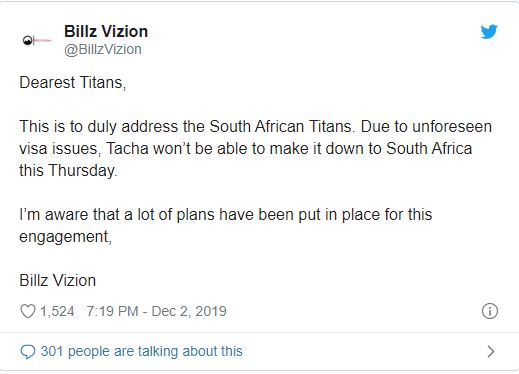 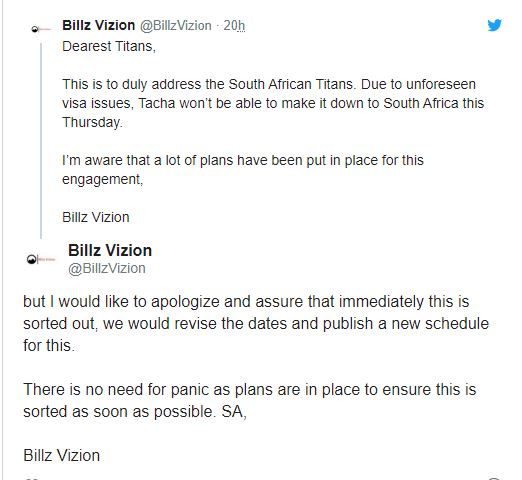 “It’s well. Nothing good comes easy. No venture starts perfectly without any glitch. Those hitches may be bothersome, but ultimately, they make you stronger, smarter and more prepared to do better next time. Apologies to those in SA & may their sacrifices not be in vain,” a fan replied.

Shortly after Tacha had announced Teebillz as her new manager, she had spoken of Biggie, the instructive voice behind the screen of the reality show, as the only person she was attracted to while in the ‘Pepper Dem’ house.

She also apologized to Nigerians and viewers over the fiery personality she had put out during the 2019 BBNaija, one of which had eventually caused her disqualification following a fight with Mercy Eke, the eventual winner.