A police officer who brutally murdered a truck driver during an argument is still on the run days after the incident. 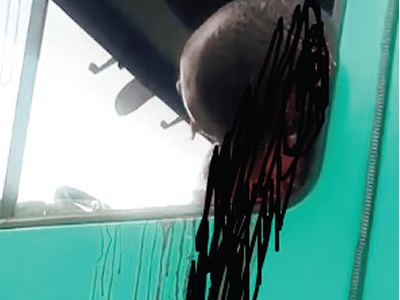 The truck driver was killed during an argument with the police officer
The Ondo State Police Command, yesterday, said that the policeman, who killed a truck driver on Monday at a checkpoint, was yet to be arrested.
According to NewTelegraph, the Ondo State Police Public Relations Officer (PPRO), Femi Joseph, said that the killer cop, identified as Sergeant Idowu Omosuyi, fled after committing the  alleged crime.
Omosuyi, attached to the Federal Highway Patrol, was said to have shot the truck driver, Ado Saleh, at a checkpoint in Uso, Owo Local Government Area of Ondo State during an argument.
The incident led to traffic snarl on the busy Akure-Owo highway as truck drivers embarked on a protest.
Joseph stated that policemen as well as detectives had been deployed to track down the fleeing killer cop.
He also disclosed that five other members of the team were already in detention.
The image maker further stated: “We are yet to arrest Omosuyi but other members of the team have been arrested and are currently in detention. It was during our preliminary investigation that the members of the team told us that immediately after the incident, Omosuyi dropped his gun and ran away. But we are after him, he cannot escape. We’ll soon declare him wanted if he doesn’t report himself to the Command. The Command has begun the trial of all members of the team and we are on the process of declaring him wanted if he fails to show up.”
A police source said the Command had taken the deceased to Adamawa State where he was buried.
Meanwhile, the Nigerian Bar Association,  Owo branch, which condemned the dastardly act of the policeman, has called on the police Command to ensure the prosecution of the trigger-happy policeman.
In a statement issued by the Chairman of the association, Mr. Tajudeen Ahmed, NBA condemned the unprofessional attitude of the policemen on the roads.
The statement reads: “The NBA Owo branch noted with delight, the resolve of the Ondo State Police Command to ensure that the culprit of the ‘Uso Police Murder’ is made to face the full wrath of the law. The branch hereby expresses her willingness and readiness to assist in the due and diligent prosecution of the culprit, on pro bono public basis.”
Top Stories