Sarah Huckabee Sanders has been made to apologize to presidential hopeful Joe Biden for mocking him. 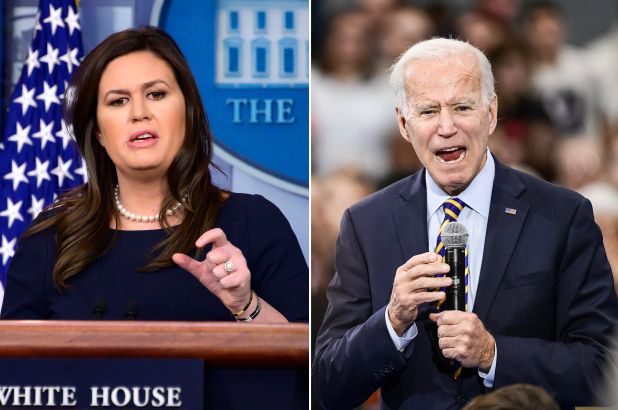 Sarah Huckabee Sanders and Joe Biden
According to a report by AFP, President Donald Trump’s former press secretary has been forced to apologize to presidential hopeful Joe Biden for mocking the candidate, who has struggled with stuttering after he touched on the matter during Thursday’s Democratic debate.
The bizarre episode began under the glaring hot spotlight during the Los Angeles debate, as Biden — whos is not widely known as a stutterer — told the audience how people with varying problems approach him for condolence or advice.
“They keep in touch with me, the little kid who says ‘I-I-I-I-I-I-I-I-I-I-I can’t, I-I-I can’t talk. Wh-wh-what do I do?'” Biden told the audience.
“I have scores of these young women and men who I keep in contact with,” he said.
The 77-year-old former vice president’s imitation caused a stir on social media as people questioned whether he was mocking individuals with speech impediments, had himself stuttered or was compassionately recounting a tale about a child he could sympathize with.
“I I I I I I I I I I I I I I I have absolutely no idea what Biden is talking about,” former White House press secretary Sarah Huckabee Sanders posted on Twitter.
She was soon forced to apologize, however, after Biden shot back that he had “worked my whole life to overcome a stutter. And it’s my great honour to mentor kids who have experienced the same.”
Admitting that she hadn’t known he had struggled with the matter, Sanders deleted her tweet and replied to Biden, stating: “I apologize and should have made my point respectfully.”
The final prime-time debate of 2019 featured just seven of the 15 Democrats still in the contest six weeks before the first nomination ballots are cast in the state of Iowa in February.
Top Stories