I Built Projects Being Paraded By Okowa - Uduaghan Insists


Uduaghan described his exclusion from the honour list as an attempt to rubbish his contributions to the infrastructural development of the state. 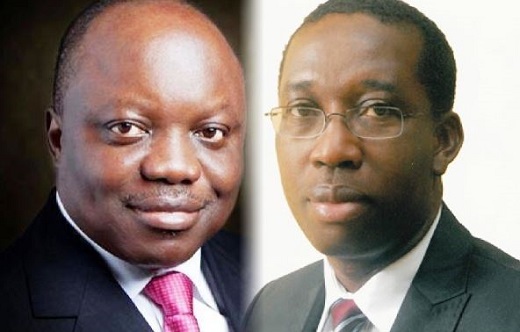 The immediate past governor of Delta State, Dr Emmanuel Uduaghan, said the infrastructural projects and enduring peace for which the state Traditional Rulers Council honoured Governor Ifeanyi Okowa were some of his administration’s achievements.

Uduaghan’s name was missing on the list of those honoured for their contributions to the infrastructural development of the state by the Delta State Traditional Rulers Council at the event held on Thursday in Asaba, the state capital.

Among those honoured at the event by the monarchs were Okowa, his deputy, Kingsley Otuaro and former governor James Ibori.

Uduaghan, in a series of posts on his Facebook account on Thursday tagged “I shall be unzipping a little today!!!,” described his exclusion from the honour list as an attempt to rubbish his contributions to the infrastructural development of the state.

He said despite building some of the star projects in the state, including the Asaba International Airport, Government House, Asaba, the two Delta Malls (Asaba and Effurun)  and the Dome Event Centre, he was ignored.

Uduaghan stated, “Julius Caesar, Animal Farm and Things Fall Apart, were some of the books we used in our literature classes at the FGC, Warri. The ‘cuts’ did not kill Ikemefuna or Julius Caesar. The shock of knowing who inflicted the ‘cuts’, killed them!

“Any ex-governor has the capacity to ensure that his state is peaceful, or create a platform for crisis. You cannot fund and mobilise traditional rulers to Asaba to spite me. All of us get ‘smart funny.’

“In spite of the lies out there, I was on the driver’s seat in 2014/15, to midwife the current Delta State administration. The critical responsibility of any state leader is to ensure that all actions maintain the peaceful nature of the state.

“I wish you a great ceremony as you use the event centre and Government House complex I built,” Uduaghan wrote.

On his part, the state Commissioner for Information, Mr Charles Aniagwu, said, “The traditional rulers had been in the state since the creation of the state and know the success of each administration, so, we are glad that Governor Okowa was honoured by the monarchs.”