A man has gotten himself in more trouble than he saw coming after beating his own wife to death over food. 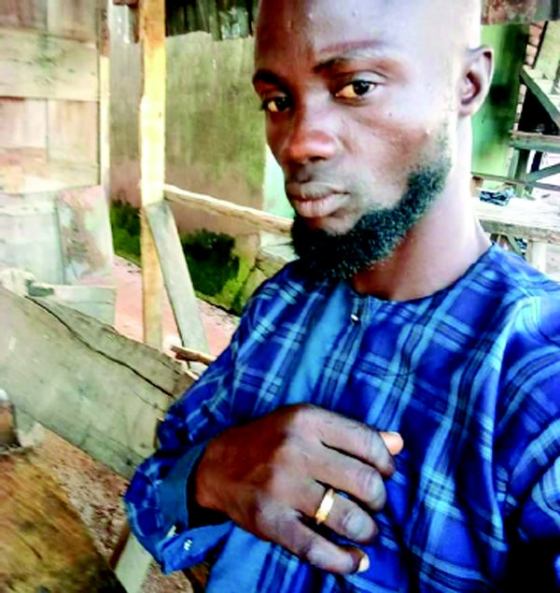 Wednesday, 25 December, 2019 was a day of joy and celebration for all people irrespective of religious affiliation.

But the day went sour for the family of Sonola in Ijeun Titun area of Abeokuta South local government area of Ogun state, as the 37-year old Mutiu Sonola reportedly beat his wife Zainab to death after a short argument over food.

Late Zainab, 34 years old, was a mother of one before her untimely death, she was a trader in Kuto market; she deals with foodstuffs and other things.

According to an eyewitness, Bankole Soluade, a resident of the area where the couple resided, narrated how Sonola Mutiu usually beat Zainab repeatedly and how they normally intervened to stop him from the act.

Soluade said: “On that fateful day, the story changed as Sonola Mutiu popularly known as Alfa Mutiu was reportedly beat Zainab to coma. When he discovered that the woman was almost dead, he rushed her to Ogun State Hospital at Sokenu road, Ijaiye, Abeokuta for treatment but Zainab could not survive the beating as she gave up the ghost in the hospital”.

He added that “the hospital management then instructed Mutiu to carry the remains of his wife when she was finally confirmed dead.”

Mutiu then took the corpse of his late wife to his family house at Oke-Yeke in Abeokuta, where the policemen attached to Ibara police station was called upon to arrest him with the corpse.

“Mutiu was habitually beating his wife at any slightest provocation and that the latest assault leading to the woman’s death was triggered by a “minor disagreement which was on food.”

On her part, an old woman who identified herself as Mrs. Aileru, said Mutiu has two wives. She said Zainab was the second wife.

She said, both Mutiu and Zainab used to have quarrels to the extent that whenever there was quarrel between them, Mutiu will beat Zainab blue black.

“Family members and neighbors had settled issues for both of them on several occasions. Even there was a time Zainab packed her belongings and moved out of Mutiu’s house, we settled the quarrel then and came back”.

“I was surprised when Mutiu called her around 11am that his wife has been rushed to the hospital after minor disagreement between the two of them and he later called back around 11:30am to tell her that his wife is dead.

“Mutiu started beating his wife in the morning on Christmas Day over a minor disagreement, despite series of warning by neighbours that he should desist from further assaulting his wife, a furious Mutiu kept hitting her with blows until Zainab slumped and slipped into coma.”

The spokesperson for the Ogun State command, DSP Abimbola Oyeyemi, said preliminary investigation revealed that Mutiu was fond of beating the deceased at the slightest provocation and that the incident, that resulted in her death, was a minor disagreement.

Oyeyemi said: “The corpse of the deceased has been deposited in the General Hospital, Ijaiye mortuary for autopsy.”