LASU Murder: The Dream My Daughter Had Before She Was Slaughtered - Father Tells Heartbreaking Story


She was christened Favour Oluwaseun 22 years ago in appreciation to God for putting smiles on their face after a long delay. 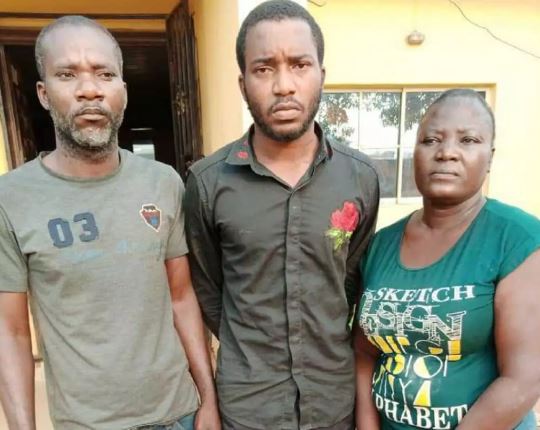 Many years after marriage, Mr and Mrs Daley looked up to God to break the yoke of barrenness. They prayed hard and kept an unshakeable faith in God. They finally had a breakthrough; a bouncing baby girl was welcomed to the family amid pomp and circumstance.

She was christened Favour Oluwaseun 22 years ago in appreciation to God for putting smiles on their face after a long delay.

From an infant to a toddler, teenager to a young woman, Favour’s life witnessed steady progression to the excitement of her parents. But just few months away from graduating at the Lagos State University, Ojo, where she was studying Theatre Arts, the wicked ones cruelly ended her life and promising future.

By the time a self-acclaimed pastor, Segun Philip and one 23-year-old Owolabi Adeeko, also a LASU student, were done with dismembering Favour’s body on December 8, her ambition of becoming a star filmmaker and director had vanished into thin air.

“Favour was the first born of the family and she was a golden girl to us,” the distraught father told Saturday PUNCH.

“We had to wait for many years to have Favour and when we eventually had her, she was a bundle of joy.

“She was actually born in Guinea Conakry when we were on a foreign mission. It was joy for everybody that having waited for so long, the miracle eventually happened,” the father added in a voice laden with sorrow and pain.

The final-year student had visited her parents in Mowe, Ogun State, the previous day, December 7. Around 1pm the next day, she bade them goodbye and told them of her plan to see a friend (Adeeko) on her way to school.

Amiable and loving, Favour had no clue of the danger lurking ahead as she headed for Adeeko’s house. Her mobile consequently became unreachable prompting the parents to report her missing at the Mowe Police Station.

After many days of a sustained search, detectives trailed her to Phillip’s church in Ikoyi-Ile, a suburb of Osun State, where Adeeko took her to for money-making rituals.

“On getting to the church, the self-acclaimed pastor was promptly arrested but he was quick to inform the detectives that the girl was brought to him by her boyfriend, Owolabi Adeeko, who was still within the church vicinity. The said boyfriend was traced and apprehended immediately.

“On interrogation, Adeeko confessed to the police that the deceased was his girlfriend and that he lured her to Ikoyi-Ile where he had perfected plans with the so-called pastor to use her for money-making rituals. He stated further that while the lady was sleeping, the pastor gave him a pestle which he used to smash her head and the pastor quickly used a knife to cut off her neck, ripped open her chest and removed her heart which he used in preparing a concoction for him and his mother to eat,” the police spokesperson in Ogun, DSP Abimbola Oyeyemi, had explained in a statement.

While he was being paraded on Monday at the police headquarters in Eleweran, Ogun State, Philip told The PUNCH that he was paid N210,000 to carry out the devilish act.

With a heavy heart, the deceased father told a correspondent that Favour had a premonition of the gruesome incident in a dream and the family prayed fervently over it.

“She told her mother she had a quarrel with someone in her dream. She said she was fighting with somebody and the person stabbed her. That was what she told us when she came home on December 7.

“The mother asked her to relate the dream to me and she did. We prayed over it but nobody knew this incident would eventually come up,” he disclosed.

“We all just returned from church that day (December 8) and some people came home to pray for my wife,” the father noted as he continued to narrate the events leading to the sad occurrence.

“Afterwards, she (Favour) said she wanted to return to school because she would start her examination the following week. She said she wanted to join her colleagues so they could study together. It was while telling us that, that she received a call.

“After receiving that call, she said she would be seeing a friend and from there, would go to school. That was how she rushed out. She left home around 1pm. She called me later and asked me to transfer some money to her account which I did and she acknowledged it via a WhatsApp message.”

Daley stated that his daughter aspired to become an actress and was following the passion with all her efforts.

“She spoke a lot about Genevieve (Nnaji), Omotola Jalade-Ekeinde and some foreign actresses. Her passion lately had been moving towards gospel music. As parents, we gave her all the necessary backing,” he added.

Sharing the good times they had together, Daley described Favour as an open-minded person who loved everyone, adding that if anyone hurt her, she would react immediately and move on.

He stated, “It has been a pleasure and worthwhile experience being her father. I am going to miss the wonderful relationship that we had together. The family will miss her a lot.

“If Favour walks into the house and meet people, you can be sure in the next few minutes she would relate with everybody. I am reserved but she was not and I think that ‘boy’ (Adeeko) capitalised on that to hurt her.

“This is a trying time for the family. Definitely a vacuum has been left in the family that no one will be able to occupy. She was such a special child.

“I had been in some situations when if I sat down and someone, Favour would come near me and tell me ‘Daddy, don’t worry, you are going to come out of it.’ Those are the things I am going to miss about her. I never had a boring time with her. She would do something that would make you laugh.”

Saturday PUNCH learnt that Adeeko is a Sociology student at LASU and ought to have graduated since last year but had an extra year.

“I learnt he (Adeeko) was going to school to attend some of the courses he probably didn’t pass. He also said he met Favour two months ago but he had been looking for a target for that evil act since April.

On his wife who was hospitalised in the wake of the incident, he said, “She is coping, but I don’t want to talk much on that.”

He thanked the Divisional Police Officer, Mowe division and detectives for helping the family to unravel the mystery behind Favour’s disappearance.

“For seven days, we were on the road, moving from one place to another. There were times we combed the bush,” he added.

A friend and course mate of the deceased with the stage name, Stars, said Favour was a loving person who was passionate about making a name in the acting world.

She said, “If you had an issue with her, she would not keep malice against you. She was everybody’s friend. We had our final year (production) project on December 4, and before then we had tedious moments of rehearsals for months. She was so excited on that day and was talking to everybody.

“Favour was ambitious. Theatre Arts is all about stage and few people have practical knowledge of it. I am so amazed that among us all, Favour and I have striven to make money from it. She had travelled to states like Ogun and Osun states and worked with celebrities. You can check her Instagram page. She really wanted to be a filmmaker and director.”

On her Instagram page, horluwaseundanielladaley, she posted pictures she took with some Nollywood stars.

Earlier, on Monday evening, students held a candle night within LASU campus in memory of the late Favour, using the avenue to seek justice for her.

President, Students Union of the university, Oluwatayo Oladele, vowed that they would monitor the case until justice was served.

“Students talked about Favour and we did our farewell. We have made it clear that we would be going to Abeokuta (Ogun State) to attend the court proceedings. We went to the police station and the DPO explained the whole scenario to us. We have all agreed to seek justice for Favour, including on the social media until judgment is delivered. Our eyes and ears are open and this case cannot be swept under the carpet.

“The suspect (Adeeko) is a student at LASU. He was supposed to finish school last year but he had an extra year.”