After Naira Marley posted a screenshot of the clergy man s*x video, Apostle Chris Omashola has released a statement claiming he has been forgiven by God. 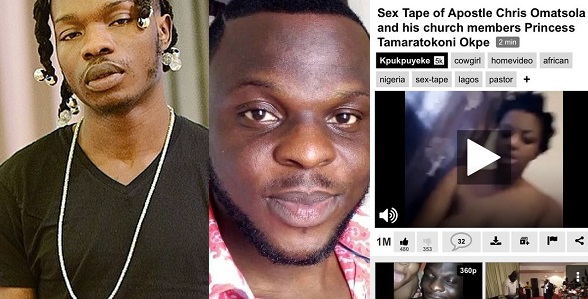 Apostle Chris Omashola of the Zionwealth Of Life Assembly, Lekki, has reacted to the backlash he has received since revealing his 2020 Prophecy in which he said God told him that Nigerian singer, Naira Marley is "demonic and Satanic and should repent now before it is too late."

Apostle Omashola made headlines two years ago after a sex tape featuring him and a certain lady surfaced online.

Apostle Omashola has now reacted to the backlash. In an exlusive interview with LIB, the clergyman said the sex tape issue is a thing of the past and that God has since forgiven him and he has been restored into full time ministry.

He said bringing up the sex tape issue after sharing what God told him to say, will not deter him as he has since been forgiven by "his maker." He pointed out that it is now left for Naira Marley to heed the counsel of God and repent.

''My s*x tape issue is in my past and I have been forgiven by God. 'Nobody can intimidate me with it. I knew I sinned and I asked God for forgiveness and he has since forgiven me. The bible says all have sinned and come short of God's glory and God takes delight in the repentance of his children. I knew my wrong and went to ask God for forgiveness and he has forgiven me. It is now left for Naira Marley to heed God's counsel and seek forgiveness. His music is not edifying to God and to anybody. It is demonic and misleading.

I am not ashamed or cannot be shamed by Marlians of my yesterday's mistakes which I have since repented from and God has forgiven me of. I have gone through series of repentance process as a man and with my head up and shoulders high, I have moved passed that. Come to think of it, what is Naira Marley's Legacy to this generation?

Thank God For Senior Prophet Jeremiah Omoto Fufeyin Of Mercy TV, Apostle Johnson Suleman, Pastor Biodun Fatoyinbo, Pastor David Ibiyeomie, Pastor Chris Oyakhilome and many other respected and annoited Men Of God whom God used to save the distorted, broken, confused and depressed me from suicide and reestablished me back on my feet in those days of adult tape Scandal, I am forever Grateful. I am a better person now by God's Grace and Mercy.

I have made peace with the lady in question, made peace with my God and moved pass that phase of life long ago. However, I stand to say NO TO internet frauds, drugs abuse, immorality, gansterism, mannerlessness and other demonic behaviors and activities of Naira Marley and his Marlians. I'll  continue to remember them in my prayers that God's Love, Grace and Mercy finds them''.