The Commissioner for Internal Security and Border Peace, Mr Stanley Emegha, stated this in an interview. 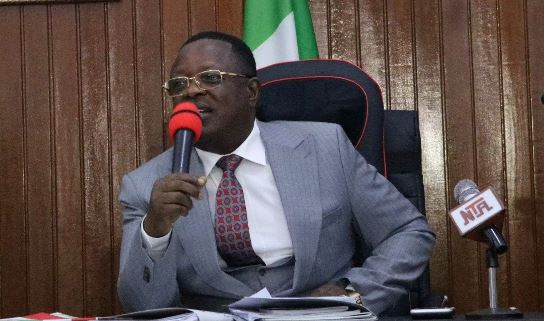 The Ebonyi State Government on Monday said Operation Amotekun security outfit launched in the South-West last week was its brainchild.

It said governors in the South-West region ‘stole’ the security idea from it, saying, “When the Governor of Kano State, muted something about this kind of security architecture in the South, recently,” he was referring to the South-East geo-political zone, in particular.

According to the State Government, until the launch of Operation Amotekun, last week, governors and leaders of the South-East zone, had had elaborate and far-reaching security meetings on how to curtail insecurity in the region, saying the South-West zone only ‘borrowed’ a leap from its South-East counterpart, in its establishment.

The Commissioner for Internal Security and Border Peace, Mr Stanley Emegha, stated this in a telephone interview with our Correspondent, in Abakaliki, on Monday.

Emegha, who disclosed that governors and leaders of the zone, last year, appointed Gen. Obi Umahi, to coordinate the security architecture of the region, added that much was being done to mitigate all forms of insecurity in the land.

According to him, by the end of January, the security efforts and plan of the region would have been made clearer. He added that the creation of the Ministry of Homeland Security, in Abia State, was one of the moves being made by stakeholders, to reduce crimes in the zone.

“The launch of Amotekun in the Southwest is what is already in vogue in Ebonyi State, in particular, and South-East, in general. This is so because traces of insecurity like kidnapping, car- snatching, armed robbery, etc are no longer found in Ebonyi State.

“The actual region the Governor of Kano was talking about for this security initiative, is the South-East, not the Southwest. What they have done is they have just copied what is already in existence in Ebonyi. This kind of security strategy is being put in place and has been made possible by the South-East Security Consultant, Gen. Obi Umahi (retd). But we have been silent about it because we are waiting to launch at the right time.

“Security as a technical endeavour, and that was why many efforts of governors of the zone in this regard, had not been made public. Security is a very serious thing. No dull person can be a criminal. Those who go into criminality are smart and intelligent persons. So we downplay what we do because we don’t want those we are targeting or fighting to cash in on our strategies.

“This is why we don’t disclose some of the things we put in place, in order not to create room for the criminals to strike. Currently, all the happenings in virtual all the Discos in Abakaliki metropolis, are monitored in our server room. Nobody knew when we mounted those cameras and CCTVs.”