It has been reported that as many as twelve Nigerian ladies are still stranded in far away Lebanon. 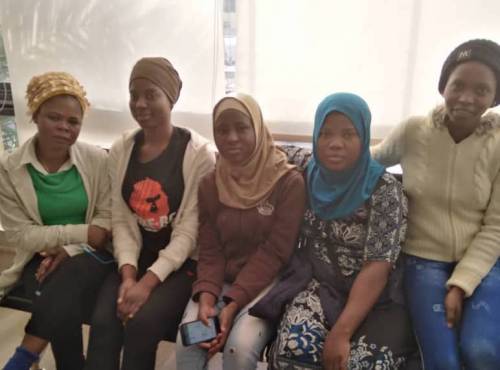 Twelve Nigerian ladies stranded in Lebanon have once again called on the Nigerian Government to help them return home.

The ladies had approached the Nigerian Embassy for assistance in returning home after they got information that government helped a lady escape Lebanon to reunite with her family in Nigeria.

The ladies, who were initially rejected and sent out of the embassy, were accepted after a report by SaharaReporters.

Director-General of the National Agency for the Prohibition of Trafficking in Persons, Julie Okah-Donli, told SaharaReporters that the agency would look into the matter while Chairman of Nigerians in Diaspora Commission, Abike Dabiri-Erewa, tweeted a picture showing the girls with a top official of the embassy in Lebanon.

However, several days after that period, the ladies have revealed that they were yet to receive any update from the Nigerian Government about their return home.

They also lamented that the embassy had placed them under a house arrest as management of the hotel they are currently lodged has been told not to allow them leave the place.

“We have not seen representatives from the Nigerian Embassy to notify us about going home or not.

“We don’t know our fate, all we know is that we were kept here in captive.

“They even instructed the hotel not to let anyone of us out.

“We really want to leave here, we don’t want food and accommodation, all we want is to go back home,” the ladies said in a video obtained by SaharaReporters.

The ladies trafficked to Lebanon had in an old video appealed to the government and well-meaning Nigerians to help facilitate their return to Nigeria.