Two men have been apprehended by the police for being in possession of human skulls and liver paid for by a native doctor. 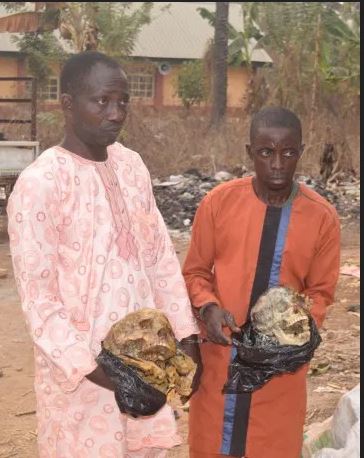 The command also paraded two suspected armed robbery suspects who were captured after a gun duel with Police at Osu in Atakumosa West Local Government Area of the state.

Parading the suspects, the Commissioner of Police, Johnson Kokumo said Adeniyi, a patent medicine shop owner, was arrested in Iwo while travelling in a commercial bus to Ibadan, Oyo State.

He added that he was caught with two human skulls and a liver after a thorough search by men of 39 Police Mobile Force attached to Iwo Area Command.

According to him, the suspect who resides at Kajola area in Iwo disclosed to the police during interrogation that the skull and the liver were recovered from a Muslim cemetery and a mortuary in the town, where he was an attendant.

Following the gruesome murder of Favour Oladele-Daley, we have pledged to rid the state of a ritual element in the state and during one of such efforts, a suspected ritualist was caught with two human skull and other human parts.

After the arrest of the suspect and upon diligent investigation, his accomplice, Oluwole Olapade, a resident of Yemetu in Ibadan was trailed and arrested.

Olapade, a native doctor, who required human skull for charm had pledged to pay N20,000 per skull to the attendants. He had gotten a skull before which he claimed did not produce money, hence, he decided another skull should be procured for use”, the Commissioner of police added.

While responding to questions from journalists, Adeniyi said he his a patent medicine store owner, but they source for the skulls in a cemetery in the town.

He said, “I sourced for the skull in an open cemetery in the town and I have gotten one for him before and was suppose to deliver another one to him before I was caught.

“For now I operate a patent medicine store and yet to be married.

“The native doctor claimed to have known Adeniyi for long because his father was his acquittance before his demise.

Four other suspects arrested at the base were; Aniedu Essiet, Nwabueze Ijeoma Dalton, Raheem Quadri and Gabriel Jacob.

Suspects arrested at the merchant Navy base at Ifon-Osun.

The suspects said they were recruited into the service after paying fees ranging from N100,000 to N200,000.

According to them, the person who recruited them has refused to show at the police station to bail them.